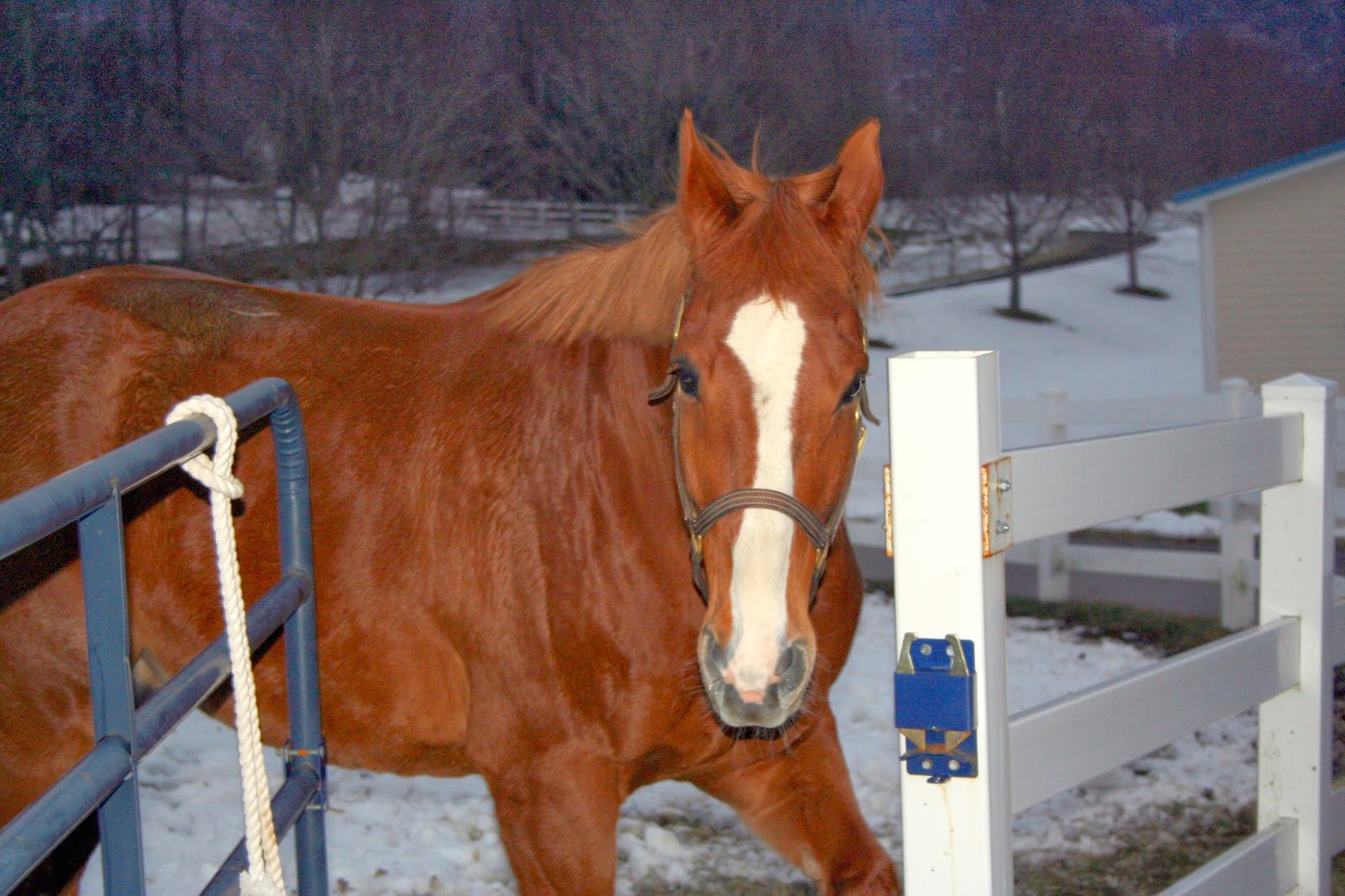 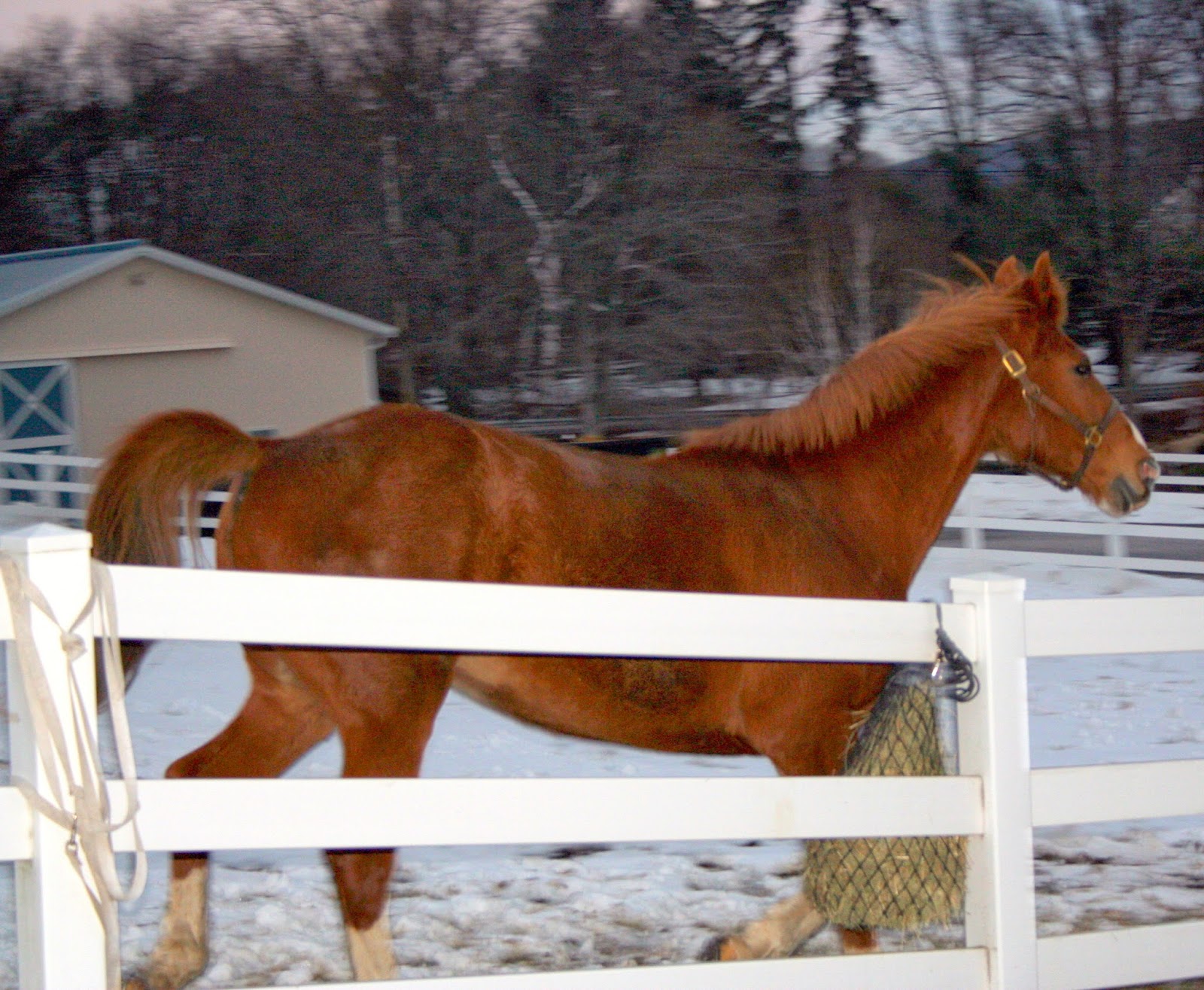 Here’s a short story you might like about one of our horses and his antics yesterday.  My daughter got home from work and noticed all the horses were lined up and staring over the fence at the hay field behind the house.  Wondering what had them so captivated she walked to the back in the snow in sneakers and spotted a figure running around like a wild man.  On further investigation she recognized Nate.

He spotted her at the same time and came running at her like a frightened 1600 lb freight train.  She held out her hand, but he didn't stop. Instead, he cruised past her and decided it would be a better idea to do a few laps around her house.  There's no fencing around the house and the neighbor's hay field isn’t fenced either.  So, Plan B, she went and opened the gates leading into the barn area, grabbed a lead rope and some Stud Muffins and headed back out.

By now Nate had found a small patch of grass under the snow on the lawn and decided to graze.  She was able to get the lead rope around his neck, give him a treat and drag his goofy butt into the barn. He couldn’t understand why no one else was in and started calling for his friends.  So now it was a mad dash to set up the barn for feed time and get the rest of the herd in with frozen, soaking wet sneakers and work clothes on. She was not amused. Well, actually, she kinda was. It was pretty funny once everything calmed down.

You see, this is what happened: Nate hasn’t really jumped out of anywhere but the indoor since last Spring.  Nate doesn’t like the indoor and on that day she let him wander around in there hoping to get him used to it.  He was doing fine and then suddenly spooked at nothing and came charging towards the doors, which had a rope across the opening at about four feet.  Beautiful jumping form, by the way, and stuck the landing.  But I digress.  We have a run-in shed in the corner of the catch pen and it has a dirt ramp going up into it.  Well, it seems that somehow Nate must have lost his footing on this ramp which was snowy and icy, and wiped out. With his legs out from under him, he must have landed just right and somehow slid right between the two fence posts and knocked out one of the bottom fence boards (they're PVC) went under the fence and popped right out on the other side of the fence into the hay field. How he did this is beyond us.  Nate is 17.3 hands and pretty long head to tail.  I’m guessing he’s about 9-10 feet in entirety; the fence section is eight feet. There was a big horsey snow-angel body print on the outside of the fence.  Only Nate could have managed this.  As I’ve said before, whenever we do any thing on the farm the first question asked is, “how can Nate get into trouble here?” We never imagined this scenario. Now we know...

Luckily, he only had a few tiny scrapes on his head and rump.  Even luckier he didn’t run out into the road.  I think once you realize they’re unharmed and safely in the barn you can laugh about stuff like this, but at the time you’re dealing with it things can get a little tense.

Until next time
Quote for Today
How do you catch a loose horse?
Make a noise like a carrot.
- British Cavalry joke
Posted by Grey Horse Matters at 5:37 PM