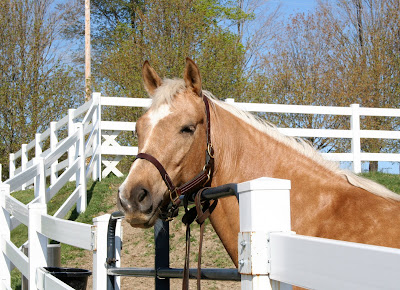 ' Dusty Rides Again '
This past weekend, Dusty and I got a few rides in and I’m happy to report that we accomplished some good behavior.  I hadn’t been able to ride for two weeks because of other commitments so it was a treat for me.  For Dusty, in reality, she couldn’t care less.
Our first ride was in the outdoor ring and she did really well controlling her enthusiasm.  On her last few rides she’s been really tracking up well!  Color me surprised; with her conformation, I didn’t think she had it in her, physically.  I’m sure it’s due to all her wonderful training.
Next day we had quite a long and interesting ride.  We started out by walking around the outside of the indoor arena; there was lots of snorting going on, but if that’s the worst spook she’s got in her I’ll take it. As we rounded the arena heading to the front doors, she had to cross a round grate that’s part of the drainage system. She stopped, snorted, backed up and turned herself around a total of  4 times.  I didn’t push the issue and went up the hill a ways and around the drain, into the indoor.  After walking around on the stone dust and a few snorts about the plastic fabric base that’s still showing in places, we left.  Mind you, the bulldozer sitting in the middle didn’t bother her at all, just the scary plastic.
After our foray into the arena we headed to the back field.  I planned to mosey around for a while as the day was heating up quickly.  Unfortunately, Dusty had something else in mind. Mainly she wanted to turn around and go back to the barn.  As she turned around I softly led her into a circle to get her mind on the fact that we weren’t heading back just yet.  She accepted this with no problem. Then we worked in the outdoor arena for a short while and she seemed to have a fine time and ended up proud of herself for getting everything right.
I know there are a lot of riders and trainers who would disagree with my particular method of dealing with Dusty - or many of our horses, for that matter.  I’m sure there are some who are right now shaking their heads and saying to themselves that I should have forced her over that drain and not gone around it. Or instead of doing large quiet circles to get her mind on moving and away from her thoughts of turning home, perhaps I should have forced her to listen to me,  made her do my bidding and shown her that I was herd leader and all that comes with that sort of training.
Here’s my basic philosophy concerning most of my training techniques:  I find no reason to pick a fight with a horse that is genuinely afraid of something and refuses to comply. If there is a simpler, less dramatic way to get through a ride with the same result, why bother forcing the issue?  As we continue to practice each task, she will eventually accept it more willingly than if I did force her. As for her turning towards home, I think I got my point across that she could turn that way but when we came out of the circle we were heading in my preferred direction.  It seemed a better solution than if I were to have pulled her around and forced her, just to show her who’s the leader.
Being the leader... hmm.  Now that’s another question that sort of baffles me. Dusty knows she is the alpha mare in her small herd of mares.  I know who I am in the human herd I interact with.  It seems to me that Dusty has figured out by now that I’m not a horse, so she doesn’t have to “alpha” it over me, as it were.  I’m not her herd leader but her rider and teacher.  When I ride, I try to teach her the right way of doing things.  But I don’t expect her to learn all of it on the spot.  And I don’t demand that she blindly trust me when she’s afraid; trust has to be earned.  It’s a gradual process, and learning the right way will make it easier for her to relax and understand what I’m asking.  If what I ask is appropriate and fair at her stage of training, and takes into account the immediate circumstances, she’s more likely to respond willingly now and in the future.  That’s what makes the kind of rides we will both enjoy.
So the point I am getting at here is simply that, if we respect each other, neither one of us should force the other into doing something we don’t want to do.  We can have a civil conversation and arrive at the same conclusion without any shouting, kicking or pulling.  As we learn from each other how to relate, I’m sure in the end we will form a respectful, lasting partnership.  And really, isn’t that what it’s all about…?
Until next time
Quote for Today
At its finest, rider and horse are joined not by tack but by trust. Each is totally reliant upon the other..... Each is the selfless guardian of the others very well being.
Posted by Grey Horse Matters at 8:00 PM