Below is a quick update chronicling how Donna Byrne’s ride is progressing on horseback from Florida to Texas. I copied and pasted this article from TBO.com. My first post about this woman and her mission was when she started her trek five months ago in a post titled, “Would You Do This”. It looks like she may be reaching her goal soon, but at what cost. Anyway, just thought some of you might be interested in her progress. 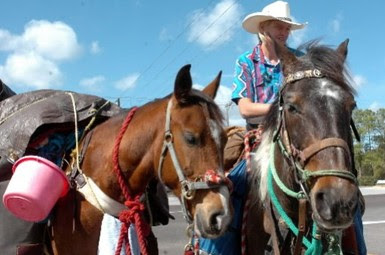 Donna Byrne, an out-of work cowgirl, left Arcadia, Florida earlier this year on horseback, heading for Texas. Jay, the horse she is riding in this picture, died last week.
Cowgirl Donna Byrne packed up her two horses, Tonto and Jay, in Arcadia, Florida five months ago and took to the road, hoping to make it to Amarillo, Texas, and a new ranch job.
She’s less than 80 miles from her destination, but she’ll arrive exhausted, beaten down by the long trip and heartsick.
Jay, the horse she was riding, died last week.
Byrne thinks it was the result of eating a poison plant in the town she was passing through, Childress.
“I saw her chewing on something and I jerked her away,” she said. Soon after that she began to bleed from the nose, then her tongue swelled up. Byrne called a veterinarian who came out to check on Jay. He gave her medication but couldn’t save her.
Byrne later became ill and went to the local hospital emergency room. She thought she was having a heart attack, but the doctor said she was in shock. He medicated her, she said, and when she got out, all she wanted to do was get back on the road.
She bought a new horse, which she knew seemed cold, so soon after Jay’s death, but “I had to do something,” she said. “I wanted to get out of that town. I just wanted to get the heck away from there.”
No one performed a necropsy to figure out what killed Jay, but it could well have been a poison plant, said Terri Gammage, president and founder of a horse rescue operation in Amarillo, Safe Hayven.
“She could have died from eating toxic weeds. We have them here, they’re everywhere. She could have died from heat stroke. I do not know. And it’s too late to find out now,” she said.
But after getting calls from people who have been following Byrne’s story, she tracked her down on Monday. She wanted to check on Tonto and the horse that Byrne bought to replace Jay. Byrne is calling the new horse Bitch, because she has a surly attitude.
Gammage found both of them in good shape, she said. “As a cruelty investigator, I would never dream of trying to make a case against her,” Gammage said. The horses seemed comfortable. They weren’t blowing “or dancing around like they were hurting.”
Tonto is lean, but it’s what you would expect from a horse that had travelled 1,500 miles.
Byrne, 44, set out from Arcadia in February, riding her horse Jay and using Tonto to carry a tent, clothes and almost everything else she owned.
She had lost her job on a small ranch and decided to head to Texas, hoping to find steady work in Amarillo. Ultimately, she said, she wanted to get to Montana, where she worked several years ago.
Along the way, people began giving her money and places to stay and feeding and putting new shoes on her horses.
Many offered to drive her and her horses to her destination, but she said no. She wanted to keep riding, to prove she had the guts to finish what she started.
Byrne wound up in a hospital in Tallahassee and later in Pineville, La., with a leg infection. After several days on intravenous antibiotics in Pineville, she finally got the infection under control. Then she decided to ride a bull in a rodeo down the road from Pineville; she used to be a professional bull rider. She flew off after 7 seconds and bruised her back.
But none of what she’s been through on the road compares with losing Jay, she said on Monday. “People think I killed her. I didn’t kill her. I would have killed myself before I killed that horse,” she said.
Some bloggers on a Web site set up to follow Byrne’s progress have been condemning her for subjecting her horses to such a long trip. But after seeing Byrne’s horses and meeting her, Gammage defends her.
“What she is doing is not any way worse than what a lot of people on competitive trail riding and endurance riding do. They do it every day. She’s not doing it nearly as hard as competitive riders do,” she said.
“Donna has a choice in what she’s doing. The horses don’t. But as far as I can see right now, the horses are not in danger.”
But Byrne is spent. “I’m worn down,” she said. “I know cowgirls don’t cry, ride, baby, ride. But with Jay’s death, it really took a toll on me. I’m just tired.”
By LINDSAY PETERSON

A horse is an animal not a machine and is only as good as it's rider.
Posted by Grey Horse Matters at 8:09 PM