Have you ever seen a horse actually smiling? We have, and here is the picture to prove it! This is a photo of my daughter’s horse Nate. He is a 17.3 hand chestnut Dutch Warmblood imported from Holland, and he definitely has earned the title of “barn comedian.” 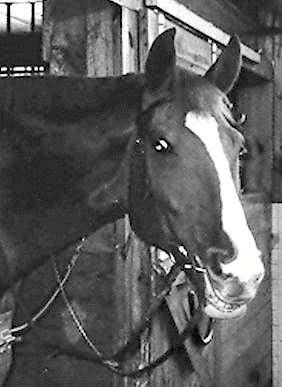 Here’s a short background on this guy:

How he got his name is mildly interesting. Nate was nearly four years old when he came to us. Before we actually purchased him, Jacquie was starting him under saddle for a friend of ours who was a breeder/importer. Every horse needs a barn nickname, but Nate didn’t have one yet. One day, after a riding him for a while, Jacquie came over to the fence where I was watching and asked, “What do you think?” “I think he has the attention span of a gnat,” I said. From there it was a short jump from “gnat” to the slightly more flattering “Nate.” The name (and the short attention span) have remained with him ever since.

Nate is very sweet and, though he’s second in the herd hierarchy, he everybody’s friend. It’s not unusual to see him playing with Sami and Donnie all day. He’s kind of like the nice guy who helps the old lady across the street. When we integrated the old mare Sweetie into the boys’ herd, Nate would follow her around and guard her so that the other rowdy boys didn’t harass her too much – unlike Mellon with Dusty, he wasn’t possessive, and he’d let the other horses come over to “talk” to her, but if they started being rude he’d chase them away. We sometimes call him “the Mayor,” as he’s also been known to visit each horse’s pile of hay – or, when they live out, their feed tubs – and help himself to just a few bites and then leave; surprisingly no one seems to mind, not even Mellon. Nate is also very curious and has become quite the locksmith; he can undo just about any latch or untie any knot in his effort to find an escape route and go on an adventure. One of his more bizarre quirks is that he will attempt to squeeze himself into any unexplored space around the farm, something we have to keep in mind when erecting fencing, dealing with fallen trees, or taking the pickup truck into the field with the window open… and he will dismantle anything that isn’t bolted together, so don’t turn him out in an arena with a course of jumps set up, unless you want it demolished – though sometimes he’ll canter around and jump them first!

Aside from his winning personality, one of the motivations for our buying Nate was his incredible jumping ability. Nate seems to love jumping, and Jacquie planned on competing him in the bigger jumper divisions, at which he would have excelled. Unfortunately, he’s had more than his share of problems over the years and hasn’t been able to realize his full potential. It started with a minor check ligament that sidelined him briefly in his early training; then a hairline fracture to his cannon while he was in Scotland; then he developed a serious respiratory condition; a nasty case of Lyme Disease; and has now been diagnosed with PSSM. He has faced some long lay-ups, some unpleasant medical procedures and some tedious therapies over the years. However, through it all, he has still maintained his sense of humor and finds ways to amuse himself, his herd mates, and the rest of us on a daily basis.

Being the farm prankster, we normally warn visitors about his odd sense of humor. For example, he likes to impersonate a billy goat and, if you are forgetful on any given day and bend over in front of him, you may get a head-butt to the derriere and go flying. He’s also been known to give atomic wedgies during hoof picking sessions to his front feet. In addition, he has a shoe fetish – he loves to check out people shoes, and if you’re not careful, he’ll pull one of them off your foot and leave with it in his teeth!

This year he is on a different diet to address the PSSM, getting regular therapy, and is going to start a new training plan as soon as the weather permits, so we are hopeful he will slowly be able to get back into regular work again. He loves to work, and is such a fun horse to ride, even if it’s just for a hack in the field, so we hope this will be his year to be healthy and have fun doing what he loves. While big jumps and serious competition are no longer a part of the plan, we’re hoping he’ll be able to hack out and build upon his dressage training. Even so, after all he’s been through, we’d be content just to see him getting up to his usual antics and playing happily in the field with his friends.

Be wary of the horse with a sense of humour.
- Pam Brown