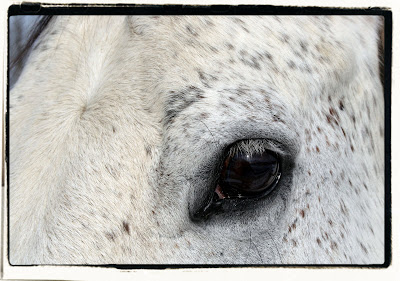 Donnie’s story is a long yet interesting one, so in order to get the complete picture of all that he has been through in his young life, a few posts are in order to capture his true character. Let’s start at the very beginning.

A few years ago, we were looking for a combination school horse/possible sale horse. My daughter had previously worked at a sale barn and so the first stop on our quest was there. We soon found ourselves the proud owners of a talented big bay OTTT. As we were loading him, another horse caught my eye. A big boned handsome dappled grey - what a surprise, I liked a grey horse… His color wasn’t the only thing I noticed though; he had a friendly quality about him and a kind eye. The seller practically threw him in with the other horse for a nominal purchase price.

Donnie is a QH/Draft Cross, we are 99% positive the draft half is Percheron. During a discussion about the breeding of QH/Draft crosses, the seller told us that in the West (where he shipped in from,) the breed was becoming popular with cattle ranchers. It seems there is a particular breed of especially large cows, and the quarter horses were too small to use, and so they introduced draft bloodlines into quarter horse lines. Now I have no idea if this is a true story, a misconception, or a convenient story told to buyers. (If this explanation was wrong, I welcome your expertise - please correct me if I’m wrong.) In any event, this was supposedly, what Donnie had been bred for, and we were told he was green, but completely broke to ride.

Below is a picture of Donnie the first day we met him. As you can see, he is a handsome boy. It was easy to fall for this sweetheart. He seemed to have perfect manners, and to this day he never wants to display any behavior that he feels would cause displeasure. He’s also an incredibly smart and sensible horse, and he loaded on the trailer like a dream. We were told his age was five or six. In reality he turned out to be much younger; his actual age we estimated at maybe four tops, and more likely three or younger. 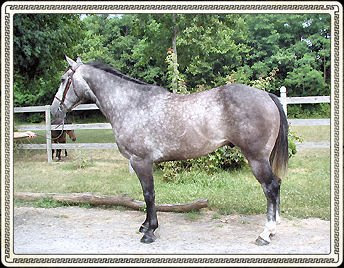 Our new horses get to relax and learn the routine of the barn in their first week, and we began to realize he had some issues we had to deal with right away.

The first being the removal of his halter. There was no way he would allow his halter to come over his ears without panicking, though this was easily remedied by unbuckling and sliding it slowly off. Putting the halter back on presented more of a problem. Having been around all kinds of horses with all kinds of issues for years, we were familiar with the reactions of horses who had been ear-twitched, and it seems Donnie must have been subjected to this abuse at some point in his early life, because he had an absolute phobia about hands near his ears. Again, patience and a halter with a buckle worked wonders, though to this day we still have to go slow with him.

We got him in July, so we didn’t have to blanket him yet but when we did it posed our next problem: the blanket… this predator was not getting anywhere near his back, and I must admit, it’s near impossible trying to get a horse to accept this in a small space, like a stall. So, to take some of the pressure off, we took him out in the round pen so he didn’t feel claustrophobic. Eventually, with slow and steady determination and rubbing it over him a little at a time, this was slowly accomplished.

Pacing in the stall was another problem. Venturing a guess, I would say he’d never been in a stall or confined space in his life, and if he was, it probably wasn’t a good experience, as poor Donnie would cower at the back of his stall, trembling all over whenever humans were about. This needed to be addressed because he was so stressed, and his stall looked like poop soup every morning. The stall needed to be stripped and redone each day, and it was just heartbreaking to see him so upset.

Not surprisingly, he was pretty nervous about grooming as well, though once he realized what that was all about he started to enjoy his grooming sessions more and more. As for picking his feet, front feet were not much of a crisis, but he would not pick up his back feet. Which we took to be mostly a trust issue, so we didn’t push too much on that problem just yet. That particular matter was resolved after some time also.

Now for the good news: Being so young and sweet, when he was first introduced to the rest of the herd, he got along great with everyone. He presented no threat to the hierarchy and, as expected, wound up as low-man on the paddock totem pole. And Nate, being the farm “Mayor,” befriended Donnie instantly and took him under his wing. To this day, Donnie and Nate are the best of friends – always playing together, grooming one another, or sharing a pile of hay.

But Donnie’s story with us was just beginning….

A boy is a long time before he knows his alphabet, longer before he has learned to spell, and perhaps several years before he can read distinctly; and yet there are some people who, as soon a they get on a young horse, entirely undressed and untaught, fancy that by beating and spurring they will make him a dressed horse in one morning only. I would fain ask such stupid people whether by beating a boy they would teach him to read without first showing him the alphabet? Sure they would beat him to death before they would make him read.
- Reproduced from The Man Who Listens to Horses - Original source unknown.