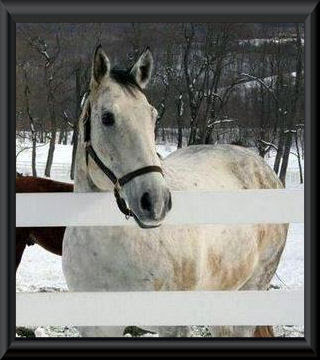 After a few days of handling, it was time for Donnie to go to work. Since we were told he had previous training and would be no problem to ride, we decided tentatively to get him tacked and see how he reacted when someone tried to ride him. Much to our surprise, he stood like a pro in the aisle while we put saddle and then bridle on him. Oddly, bridling presented none of the problems the halter did, and to this day, he will lower his head, take the bit and let us slip the bridle over his ears without any fuss! That one still has us scratching our heads... but we were off to a good start.

Since tacking had gone so well, we took him right up to the outdoor arena during a quiet time when no one was riding. My daughter likes to assume the best when starting with a new horse, and then works backward if any problems arise, so she walked him right up the mounting black, fiddled around with adding a little weight, stepping in the stirrups, etc. Through it all, Donnie stood like a soldier. So, we all took a deep breath, she swung her leg over and... nothing. Donnie stood quietly and waited for her cue. She gave him a pat on the neck and asked him to walk on.

And he was wonderful. Though he was clearly nervous and a little confused, he never misbehaved. He was light, responsive and very willing to do anything she asked. He walked, trotted and even cantered a little in both directions like a pro. Because everything was going so well, she even trotted him over a few ground poles and, just to see how he’d react, a tiny little cross rail. He took them all like a star. We were pretty sure he’d never jumped before, but you’d never know it. Sure, he was a little green, but his trouble with straightness, steering, leads, etc. were all to be expected. What counted - and what made us fall in love with Donnie that day - was that he tried his best.

Over the course of the next few weeks, we gradually added to his program. He was learning to longe and work in the round pen, to hack out around the farm and ride on the trails and through the fields, to pop some little jumps in the arena and ride in the indoor. All of it he took in stride. So when a friend asked my daughter if she’d like to join a group at the local park for some trail riding, she decided to take Donnie. He was so sensible that, once at the park she was able to load and unload him on the trailer by herself. And the entire time it was as if Donnie had been trail riding for 10 years. The terrain was rocky and hilly, and he picked his way along carefully (without shoes) without ever missing a step. Even as the sky grew overcast and the wind picked up, he never spooked or got strong, and even handled it well when an uncontrolled horse rudely passed him on the trail and kicked him in the chest. Donnie, it seemed, was a smart little monkey, and definitely worth keeping. We had fallen in love with him.

And it seemed he had started to trust us too. No longer was he the horse that cowered at the back of his stall when humans were around; now he was the first to put his head over his stall guard and whinny when we walked in the barn! He seemed to look forward to his grooming and training sessions, and if you stood near the front of his stall, he’d gently grab your sleeve or the front of your shirt in his teeth (never pinching the skin) and pull you over closer for a hug or a scratch on the withers or nose kisses. Donnie was becoming a real “people horse.”

I was feeling good about my new horse and couldn’t wait to get on myself. Let me just say that, when we get a new horse, especially a young unknown, I don’t take their training on but leave it to the experts. My daughter is a wonderful, sensitive trainer and it may sound un-motherly, but she is the designated “crash test dummy,” as she has no problem getting on any bucking, rearing horse that comes along – not to mention being younger and more agile than I am. But everything was going great and Donnie seemed like the perfect horse.

One week before my planned first ride at the beginning of winter, she took him into the indoor on a cold morning and was letting him warm up slowly, walking on a loose rein without stirrups. Without warning, he launched into a series of huge bucks and catapulted her over his neck into a pretty dramatic face plant on the floor of the frozen indoor. This was so out of character for Donnie that, looking for an explanation, we attributed this to the barn manager’s German Shepherd, who had appeared out of nowhere in the indoor. We’ve since realized that Donnie is petrified of dogs. It seemed easy enough to avoid the unpredictable dog while we could work on desensitizing Donnie to dogs gradually. And because the dog was always bursting into the indoor, we decided to work him in our back field where we had a makeshift dressage arena and hunt course set up.

Though Donnie seemed tenser than he had been before, he continued to work well and without any other bucking incidents. We wrote it off as a fluke. Until the next incident happened out in the field; this time, Donnie seemed to have spotted a hole under the grass of the field as he trotted along; as he stretched his head down to get a better look at it, he suddenly erupted in a huge, unexpected buck, launching my surprised daughter into the hole and running back to the barn. Again, out of nowhere, bucking and another unscheduled dismount. Was this getting to be the normal way of things instead of the exception? We decided not to ride him again until we got to the bottom of the issue.

Back to the round pen for more training/desensitizing work. Here we noticed something new had been added to Donnie’s problems. For some reason he would longe beautifully without tack, but could not be longed with a saddle, as it would start the bucking again. If we removed the saddle and girth, everything was fine. My daughter has taken saddle fitting courses, so we were sure the saddle fit well, but we had a saddle fitter come out and confirm this. No, the saddle was not the problem. And we had the vet and the chiropractor/acupuncturist out to rule out any back issues, but he got a perfectly clean bill of health each time. Keep working him, they said; it must be a training issue.

Back to the drawing board.

We tried the longeing surcingle. More bucking. We’d remove it and everything was fine again. When we got to the point where even a soft polo wrap tied loosely around his girth area would turn him into a rodeo horse, well, let’s just say we were stumped. And this was no ordinary bucking; from that first time in the indoor, there has been something about his bucking that is unlike anything we’ve ever seen. Each time he bucks, he goes into a full-blown panic, clenching his entire body, trembling all over and not allowing anyone to approach him afterward. What could possibly cause our sweet, friendly, sound horse to react so violently, and to be so afraid?

There were too many questions to be answered. We ruled out saddle fit. We ruled out back pain and lameness. Could he be girth sore? That couldn’t be it since he had a great back and we always used a fleece girth with elastic at both ends and never had to tighten it. Was he having some sort of flashback to an abusive training method in his past? There were just too many unknowns and he reacted like no other horse we had ever trained. It was frustrating not knowing what to do for him to make it right. The sad part was that, when he acted badly, you could tell he really didn’t mean it - it was just something that came over him and he couldn’t control it. Once he’d calmed down again, he would sheepishly come over for a hug or a rub on the neck. Whatever was happening, we were sure it was no behavioral vice or training issue. But what else could it be? 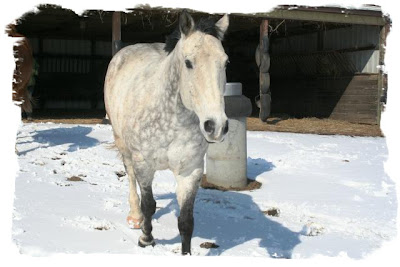 Whenever difficulties appear, the rider must ask himself: does the horse not want to execute my demands, does he not understand what I want, or is he physically unable to carry them out? The rider's conscience must find the answer.
- Alois Podhajsky