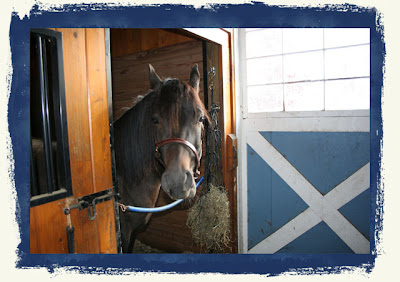 
It’s about time for the latest news on our herd. Recently, we integrated the entire herd, making it easier in the mornings to turn them out. Walking the geldings down the road to the back paddock in the ice/snow/freezing temperatures is not anyone’s idea of a good time in the morning darkness. As to how they all are getting along, well… 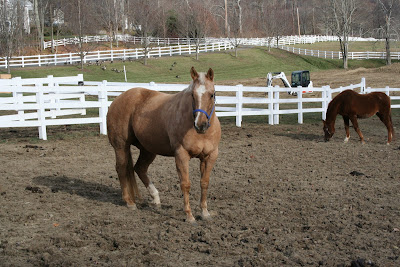 
Dusty and Sweetie, our two mares, seem to have taken a dislike to one another, to the point of totally ignoring the other’s existence. Dusty is a tomboy and loves to be out with the boys, especially Mellon. I believe this is because they are both evil geniuses who have finally found their respective equals. Mellon has claimed both mares as his own and now has a little harem. Sweetie seems not to take much notice of this fact, although she is smart enough to know if someone picks on her, (mainly Blue) she will trot over to Mellon for protection. Yes, I said trot and I’ve seen her break into a canter on occasion. Surprisingly, she is not lame at all. We had a chiropractor check her out and she said her back was just fine and the only thing troubling her is her legs, but nothing critical-just the old bowed tendon and the usual aches and pains that come with old age. 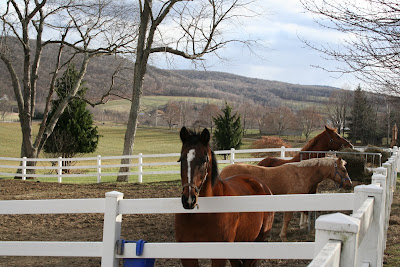 A lovesick Donnie, who Dusty will not give the time of day, follows her everywhere until Mellon chases him off. Blue has undergone a personality transformation from “Mr. Cool” to “Mr. Grumpy,” and has been harassing Sweetie and Sami. I would venture a guess it’s because there are now two horses lower than he is on the herd totem pole and he is feeling a little drunk with power at the moment. Nate has taken to hanging out with Sweetie. They are both chestnuts, and I’m not sure whether he thinks she’s his long lost mama or if he just feels sorry for her; Nate has always been a sweetheart and kind to everyone, particularly the “weaker” horses. Donnie is also very kind, tries to ward off any trouble, and is always there to cheer up his friends or share a pile of hay with them, including the two new herd members. Studley, whose official barn name is Sami is enjoying having new friends and has become the ultimate instigator of trouble with his irritating behavior, Sami is apparently making up for all the lost time he spent locked in a stall at his previous home; now he gallops around, rears and plays halter tag with everyone, practically without let-up. Even Mellon plays with him, which boggles the mind, since we’ve never really seen Mellon play with anyone--not in years. However, his annoying behavior has gotten him a kick here and there, luckily nothing too serious…yet. “Mr. Grumpy” (Blue) is the executor of most of the kicks. Despite his antics, Sami seems to be a good influence on the herd, as he is not only giving them some much-needed exercise but also reigniting their playfulness and keeping them young. Overall, they are getting along pretty well for such a random assortment of horses.

Kissed by sunlight, embraced by open fields, the horse is the center of all beautiful things.