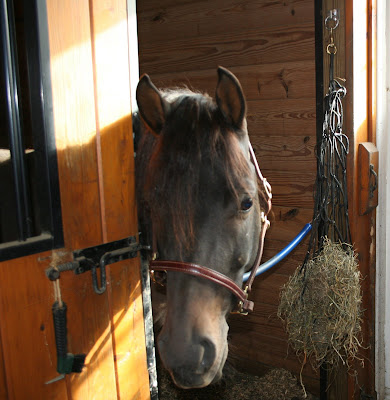 Once there was an Arabian pony named Sami, and he lived his whole life in a stall that was very dark and dank. He was born into a cruel world where horses never left their stalls, except to be run out occasionally into a small metal pen where the bright sunlight hurt their eyes and the world seemed huge and frightening. Because of his sheltered life, Sami did not know what it meant to have friends or to go outside and play. Most of all, he had no idea what it meant to be loved and cared for by a human friend.

Sami’s mom Sweetie lived across the aisle in her own dark stall. In her earlier years, Sweetie had been a much-loved show horse named Princess, she knew all about the world outside her box and what it meant to be special—to be loved. Her poor little Sami knew nothing of the wonders beyond his dank stall. His mama told him stories about her life before coming to live at this barn, and he could not even imagine what riding in a trailer, eating green grass, being groomed or having a rider on his back would be like, but to him it sounded wonderful compared to what he had now. Sami did not have much of a life to show for his five short years. At night, he dreamed of galloping in a meadow, though he had neither galloped nor seen a pasture in his whole life. Mama assured him someday he would find the perfect human to love and take care of him, but his experience with human contact was limited to being fed and pushed to one side or the other in his stall by the man who cleaned up. Sami had little or no hope of his situation ever getting better. He was indeed a sad little pony.

One day he heard a lot of commotion around the barn. Trucks were pulling in with trailers attached. People were walking up and down the aisle looking in the boxes. Sami pushed his nose up to the metal bars and tried to see over the partition. What was happening? The strange people were taking the horses out of their stalls and leading them away; but where they were going when they left, no one knew. Sami asked his mama if they were going to new homes. She told him yes, though she wasn’t so sure. There was another place unwanted horses like them usually went. Nevertheless, she didn’t want to scare him. She would rather he learned to have hope.

“Mama, there is no one else left here! I guess there are no homes for us.”

“My Sami, you mustn’t think that way. There is always hope. I want you to promise me that you’ll be good and not let yourself be afraid or sad just because you don’t know the future. You are young and you have plenty of time left for a good life. Someone will come for you. You’ll see.”

“But what about you mama? I don’t want to leave you!”

This made her heart break. She knew no one would want her now that she was crippled and old and could no longer provide foals. It was too late for her. But he still had a chance. She wanted to prepare him for the worst.

“Sami, I am old and I’ve had a full life; I’ll be happy to stay here. You mustn’t be sad if I can’t come with you. I’ll be alright. But I want you to go to the very best home, so you have to be brave. Can you do that for me?”

Hours passed and no one else came. But then, just when they had given up hope of anyone else coming back for them, another trailer pulled up in front of the barn and two strangers got out. They walked through the barn and looked briefly at the two horses, and then they began to walk out. Sweetie, who knew this, might be the last chance—the only hope left for her little Sami to have a real life, and maybe even a possibility for her. Desperately she began calling and whinnying to the strangers not to go. They returned, with halters in their hands! Two halters! Sweetie was worried, but she chose to hope for the best. She let the strangers put a halter on her and lead her away.

Sami was frightened of the strangers, but he saw how calm his mama was, and how quietly she followed them to the trailer, even though her feet hurt her and she could barely walk; he did his best to be a brave pony and followed her onto the trailer. Soon enough he and his mama were on their way to a new home.

After a few months had passed in his new home, Sami was no longer a scared little pony in a dark box. Sweetie, his mama, was also happier now that she and her little boy had gotten some proper care. During the daytime, Sami played with his new friends; having discovered the joy of running, he would test how fast his uncertain legs could carry him; then he would graze contentedly in the huge paddocks, all under the watchful eye of his mama. He seemed so happy when he was out with the rest of the herd, yet at night, he sighed and still seemed like a little lost soul.

“Oh, mama, I love our new home and all my new friends. And these people are really nice and they take good care of us. But when will I have my own person to love me and brush me and ride me?” he asked woefully. “I’ve heard all your stories about special people, but there is no one for me. Am I too small? Or not handsome enough? Is that why nobody wants me?”

“Sami, you must be patient. Someday a very special someone will come and want you to be their very own pony, but these things take time. I’m sure right now someone is looking for a pony exactly like you; you just have to wait for them to find you.”

So, Sami searched out his window every night and wished on the twinkling stars for the special person who would come for him. The weather was getting colder each day and snow fell gently on the paddocks. Sami still played hard all day with his new friends and wished on the stars at night. Nothing changed. Sami was losing hope.

A lot of hustle and bustle around the barn lately had Sami wondering what all the fuss was about. Mama and the other horses told him that soon Santa Claus would be arriving in a sleigh pulled by flying reindeer to fill the stockings that hung on their stalls with special treats, and sometimes he would even bring special gifts for the ponies that had been extra good! Sami’s eyes bulged wide, could that be real? Flying reindeer? Gifts? Mama assured him it was true; “the best part of Christmas Eve, Sami, is that you get to ask Santa to make one wish come true for you.” Sami bobbed his head up and down; “I know just what to ask for!”

The clock struck midnight on Christmas Eve and sleigh bells jingled in the distance. With a whoosh of runners on snow and a hearty ho-ho-ho, Santa landed his sleigh outside the barn. Little Sami could not believe his ears or eyes at this magical sight! Santa appeared in the barn with a bag slung over his shoulder. He went to each stall filling each stocking with tasty treats. Then he asked each horse what he or she wanted for Christmas, and they all made a secret wish. Since it was midnight on Christmas Eve, all the horses could speak human according to myth. Sami was awestruck into a wide-eyed spell of wonderment as he watched Santa pass out their special treats

“Sami, you’ve been a good pony. What do you want for Christmas this year?” Santa asked. Sami whispered his wish into Santa’s ear. Santa smiled, patted his neck, ruffled his mane, and told him he would see what he could do. Then off they all flew into the starry night.

Christmas morning arrived with no change in Sami’s circumstances. He was given extra treats and turned out with the rest of the herd as usual.

In the afternoon, he was brought in and groomed. Sami loved being groomed and fussed over and, even if Santa couldn’t grant his wish, he knew he had a lot to be grateful for. He was having a happy Christmas after all. Sami was put in his stall with some sweet-smelling hay. He didn’t mind being inside, but thought it was odd no one else was brought in.

He munched his hay quietly, a little bewildered, when suddenly the barn doors opened and there stood a little girl. She marched right over to Sami and petted his inquisitive, wiggly nose. Her small hands held treats and carrots for him. Sami played with her hat and pulled it off, which made her giggle. Then he nuzzled her hair. She laughed and petted him some more. They were both having such a good time with each other.

“Grandma is he really mine?” she asked, rubbing his face with her mittened hand.

“I love him! And I think he loves me, too.” She kissed him on his velvety nose.

“You’re my pony now and I’m going to love you forever,” she whispered to him.

Sami nuzzled her cheek and shook his mane. He wanted to jump up and down, and run and buck and whinny to tell the whole world how happy he was. Sami couldn’t believe that this little girl loved him, and he sure loved her back.

Santa kept his promise and found Sami the perfect little girl to love him as her very own, and he would love her and take care of her too. What Sami didn’t know is that Santa had also granted Sweetie’s request that day too. As she looked on from her pasture she saw how happy her little colt was, and she thought to herself, “Some Christmas wishes really do come true….” 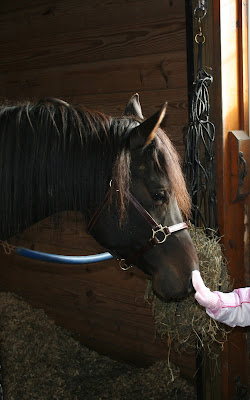 Posted by Grey Horse Matters at 9:37 AM