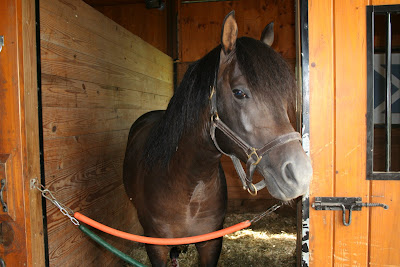 Herd Integration
Integrating a new horse into the herd has always been one of my least favorite horse jobs. My stress level climbs a few notches because of the unknown factors. The chance of an injury to any of the herd members is at the top of the list. Will someone be kicked? Will they tear around like a bunch of whirling dervishes? Too many things can go wrong. I have always tried to integrate a new horse in a responsible manner by turning out the head of the herd first and then introducing the new horse and see how they interact. Once this is accomplished, hopefully without too many dramatic exchanges, the remaining horses are turned out on a staggered basis. Most times, it works out for the best.
Thankfully, this was the case two weeks ago when we introduced our little “Studley” the rescued Arabian, into the herd. Mellon - the head honcho - was in his paddock and then little Studley went in. He is a little shy and a bit of a chicken, so there was never a chance he would try to take Mellon’s top spot. After the initial smelling, pawing, and dancing around Mellon gave him a kick. Not hard, just a reminder of where he would be in the herd order. Next came Nate - all 17-3 hands and 1650lbs of him - and again the poor little guy got a half-hearted kick. By now he was pretty much saying, “Hey, what’s the problem? I’ll just be over here by the fence minding my own business. You guys okay with that?” He was probably wondering what the deal was with these two. Blue and Donnie went in next, did the usual meet and greet without major incident. Then the entire herd went for a victory lap around the paddock and then everyone settled down and started to graze.
Things have been progressing fine and everyone is getting along. The little horse loves nothing more than playing, and Nate and Donnie couldn’t be happier about that. They finally have someone new to play with and these two “chunky monkeys” are getting a lot more exercise than usual, which is certainly good for them. Donnie also seems to be having a much better time now that he’s not lowest horse on the totem pole anymore. Even Blue seems to be enjoying having another herd member to harass besides poor Donnie. There is a lot of rearing and play-fighting, and it seems the games are keeping the little Arabian busy as he is learning how to be a “real” horse. I’m sure this is his first time interacting with others and he is thoroughly enjoying himself, though I wonder if he has any regrets or feels the same horror we do when Nate trots up to him and rears over his head to ask “hey, you wanna play with me? I can crush you like a bug if you want?” Needless to say, what he lacks in size he makes up for in speed.
Small as he is, he’s managing to hold his own out there and keep out of the way of the bigger horses. He’s learning fast and luckily seems to know how to avoid trouble. However, one thing he has recently learned is quite annoying. The previous owner had white electric tape strung along the top boards of that paddock (it doesn’t work) but ‘Studley’ has decided it’s a great distraction. He’s pulled huge sections of it down and runs with it streaming behind him while the other horses flee in horror.
Cute, huh?
Not really. It’s already proving to be an attractive nuisance for our more curious herd members. If there is any kind of trouble to get into, Nate is sure to find it and, being our resident goofball, I just know that sooner or later Nate is bound to get himself tangled up in all of that loose tape as he tries to do his best impersonation of “The Mummy” for Halloween, and extricating him from it won’t be pretty... So this weekend’s project is to take it all down before someone gets hurt. But I’m sure it was fun while it lasted....
Until next time
Quote for Today
His is a power enhanced by pride,
A courage heightened by challenge,
His is a swiftness intensified by strength,
A majesty magnified by grace,
His is a timeless beauty touched with gentleness,
A spirit that call our hearts to dream.
Posted by Grey Horse Matters at 6:56 AM