My friend Callie at Midwest Horse has tagged me in a game of Ghost It Forward. Callie is one of the most down to earth real people I think I have ever come across in the blogosphere. She says exactly what she thinks and that is refreshing. I admire her for being so genuine. She is also one of the nicest people I’ve come across and I would love to meet this fun gal someday.

What an interesting and fun game this is for Halloween.

The rules for Ghosting It Forward are as follows:

1) Have a Ghostly Image to pass along.

2) Tag three people on your blog, with links to their blogs. Tell about what great folks they are, or offer to send them a Ghostly Treat.

3) Include a link to Ghosting It Forward in your blog.

Not being especially spiritual, (I have never actually seen Jesus in a potato chip, and I haven’t had many otherworldly things happen to me,) it has been hard for me to come up with a story for this tag. Here is my best attempt at the horse spirits that surround us all: 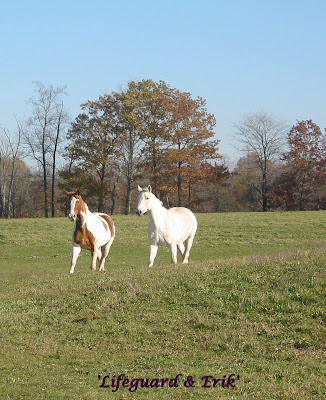 A few years ago, one of our best horses, Lifeguard, was sent to Cornell for a surgery to remove a cancerous tumor from his eye. The operation was successful, yet fifteen minutes after that report, my daughter got another call to say he had shattered his back leg in numerous places while coming out of anesthesia. Did we want them to put him down?

He was 24 years old and had a slim chance of recovery. After a few frantic calls to her dad and me, my daughter called them back and gave them instructions to euthanize him. My daughter was 10 years old when we purchased Lifeguard and he was seven. We had loved him for many years; this was a traumatic experience.

At this time, we were running a small business and I wasn’t at the barn. I jumped in the car to get up to the farm as fast as I could to help her through this tragic turn of events. It was a dreary drizzly day but as I neared the farm, the clouds broke apart and rays of sunshine shone down on the highway in front of me. At the same time, Lifeguard’s song came on the radio. All of our horses have their own signature song. I thought this was somewhat strange, but I did take it as a sign that he was all right with what had to be done. What do you think?

The second horse related ‘ghostly’ incident took place after my horse Erik passed from colic. He came to me as a 3 year old and I lost him when he was 18. He was my special horse and we had the bond I believe you are privileged to have once in your lifetime. Erik would follow me around, always curious to see what was going on. He would hang his head over my shoulder and fall asleep, give kisses and hugs and just be a love-bug in general. He was the kindest and gentlest horse I have ever known.

Mellon grew up with Erik and Lifeguard since he was four, and we affectionately called them ‘the three amigos’ because they were inseparable. Mellon and Erik shared an especially close bond unlike anything we have ever seen between two horses. After Erik passed, Mellon would look out his window at night and call to the fields. I believe he was calling to Erik to come home, or maybe he thought he saw him out there. Mellon, always a sensitive, emotional horse, was missing his friend terribly, and the stall next to his was empty where Erik should be.

I didn’t go into the barn for a week, because I couldn’t face his empty stall either. The day I finally did venture in, Mellon was standing quietly on cross-ties in the grooming stall. Suddenly he got very agitated when I walked over to him, snorting and pawing with his eyes rolling back in his head. For whatever reason I blurted out, “I’ll bet he sees Erik behind me.” I have no idea why I thought that or said it - it just came out. Eventually he calmed down and he’s been fine with me ever since that episode. Mellon still misses his friend, but he has the rest of his herd to help him cope.

I like to imagine that Lifeguard and Erik have found each other once again in the great beyond. My mind pictures them galloping through meadows and mountains, young again with no aches or pains. Standing side-by-side bent down drinking from a cool clear mountain stream, occasionally they will pick their heads up; ears pricked and look intently into the distance. Maybe they hear us talking about them and know they are still loved and remembered.

There are so many wonderful blogs that I follow it is hard to choose, I have picked the following four to pass this tag along to:

on the bit – I think that this wonderful girl who cares so much about her special horse and all the other horses in her life will have fun with this tag.

smells horsey- Ann has a wonderful blog with loads of information and humor and I’m sure she would love to share some wonderful stories about ghostly happenings in her area that we would all love to hear about.

oak in the seed- D.J. is so in tune with nature and her inner self that I’m positive she’s encountered some spiritual happenings in her life that we would love to hear about.

jme – I really enjoy this informative and intellectual blog and have a feeling that jme, could possibly write us a ghastly ghostly tale.

If any one of my picks doesn’t have the time or inclination to follow up on this tag, I would like you all to know there is absolutely no pressure. Only do it if you feel the spirits move you.

Nothing is more sacred as the bond between horse and rider...no other creature can ever become so emotionally close to a human as a horse. When a horse dies, the memory lives on because an enormous part of his owner's heart, soul, very existence dies also...but that can never be laid to rest, it is not meant to be... - Stephanie M Thorn