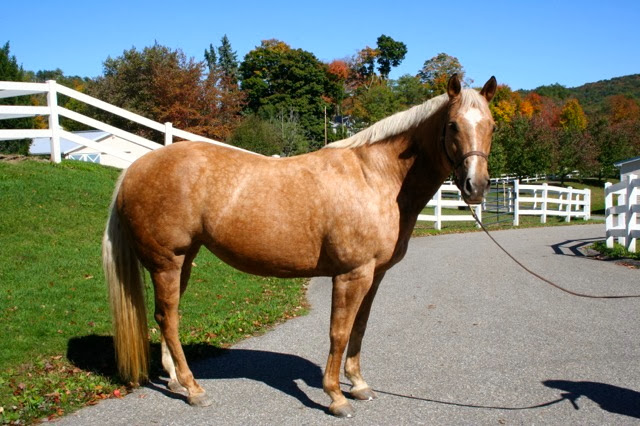 It seems the older I get the quicker the seasons change and the years fly by.  Autumn is my favorite season and has arrived with its colorful leaves and cooler temperatures. I wish I could live in a place that stayed this beautiful year round or at least the temperatures remained crisp and cool.  The herd seems to enjoy Autumn best too.  Who can blame them, fewer flies and no hot sun beating down all day.  In fact, the herd likes it so much we can rarely find them at night to bring them in, they prefer to stay outside and sleep under the stars.  So, they’ve been granted permission to think for themselves and let us know when they want to come in.

This is also the time of year we like to give the herd their pre-winter baths, mane shortening, tail trimming and sheath cleanings.  Last weekend Dusty was the first to enjoy her spa day.  Followed by hand grazing until she was mostly dry. Of course, the minute I turned her out into the catch pen she promptly rolled in the dirtiest spot she could find the minute my back was turned.  This Saturday was Blue’s turn for the full treatment also followed by hand grazing with treats. And yet, the second I turned him out he galloped all the way to the backfield without a look back. I wonder if they don’t especially appreciate being fussed over and clean but with my warped sense of hygiene I like to feel that they do.

On the riding front Dusty and I enjoyed a “welcome back mom” ride on Saturday.  I haven’t ridden her in almost two months, through no fault of her own.  In the beginning of August I was admitted to the hospital for a few days experiencing a lot of pain in my abdomen. After twelve hours in the ER and numerous tests: cat scans, ultra-sounds, MRI, blood tests and a lot of unauthorized poking and prodding they admitted me for a few days. The tests showed an abscess that was causing all the problems and I was given some heavy-duty antibiotics.  After being released I was home for a few weeks recuperating and was told not to do any heavy work to avoid rupturing the abscess so I basically followed the rules. When I took the dogs to the groomers I was lucky enough to contract a flu or virus.  That laid me low for another week.  Stuff happens and I’m feeling better now.

Back to Dusty and our ride.  I was fully expecting her not to be very enthusiastic about being ridden again. After all, she made me chase her around the catch pen with no intention of being caught for about five minutes. I had the rest of the herd on my heels as we followed her escape route. She’s the master of walking just fast enough ahead of me that I can’t get catch her and get the halter on her. Dusty should be a dance instructor, she’s great at leading a conga line around in circles.

Color me surprised when she was an absolute star at the mounting block and never moved an inch while I mounted.  We walked for a while because neither of us is in riding shape.  Although she’s in better shape than I am, after all she walks forty acres or more a day up and down hills just grazing.  Then we trotted a few times in each direction and did some figure eights at trot and walked.  She was perfect except for one thing, whenever I asked her to walk so we could end with that she’d walk a few steps then trot again.  Once we got the walk under control I dismounted. I’m certain she wanted to keep going but I don’t like to do too much when I start a horse back in work. I keep it short and upbeat so they might look forward to the next ride.  Or at least I hope they do.

Until next time
Quote for Today
When riding my horse I no longer have my heart in my chest, but between my knees.
Posted by Grey Horse Matters at 3:33 PM