A few pictures of Grady 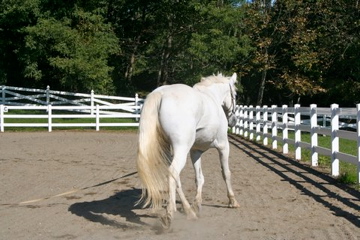 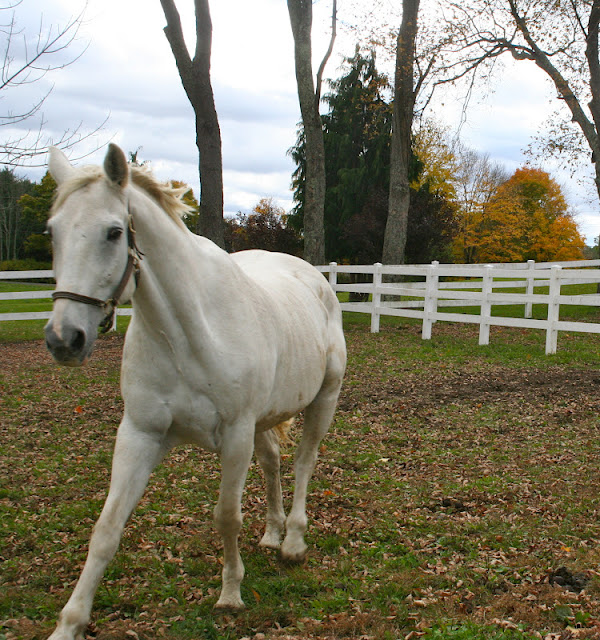 Continuing with the rest of the weekend stories: Grady was the next to be ridden after Nate had his meltdown and jumping extravaganza.  Grady is an 18hh Irish Sport Horse from Ireland that we took in when his owners didn’t want him anymore.  He's an ex-eventer/jumper who refused to jump anymore; he also has shivers.  It’s been about two years now and with the exceptional care my daughter has given him he’s turned a corner and has begun to trust us.  In addition to the change in his diet, our farrier has also done a first-rate job in helping his feet to improve.  With the proper training Grady has also been learning to relax about working.  We feel he was previously bitted too harshly, muscled around courses and rollkured through his dressage phases, so much so that his topline was almost nonexistent when he came to us.  He now has the proper muscling so he’s able to carry himself properly.  He's filled out beautifully and no longer needs the shims in his special saddle pad to wear a standard tree saddle, even with his high wither.  I’m also happy to report that he’s fitting in wonderfully with the herd now and is just as goofy and playful as the rest of them.

As I mentioned in the previous post, Saturday was chilly and windy.  This didn’t seem to bother Grady at all.  What did seem to make him anxious were shadows from the windows that seemed a slightly darker color than the rest of the sand.  The sunlight patches streaming through the windows on the other side of the arena were no problem.  But whenever he approached the darker grayish patches he just wanted to stop.  Eventually, he was encouraged to go through them, which he did trotting slightly sideways.  Whether he thought the change in color was a giant hole he didn’t want to fall in, or just something he perceived to be not quite right, we’ll never know.  By the end of his lesson he was mainly okay with it and she ended on a good note.

On Sunday Grady was back to his old sweet “I don’t want to do anything wrong or make a mistake” persona.  When we first got him in he always looked worried and seemed to be waiting for the other shoe to drop, so to speak.  I’m so happy to see this horse starting to show his goofy personality and trusting us not to do anything dramatic to him.  He’s the perfect example of “the bigger they are the kinder they are.”

Quote for Today
In the steady gaze of the horse shines a silent eloquence that speaks of love and loyalty, strength and courage.  It is the window that reveals to us how willing is his spirit, how generous his heart.
Posted by Grey Horse Matters at 5:16 PM