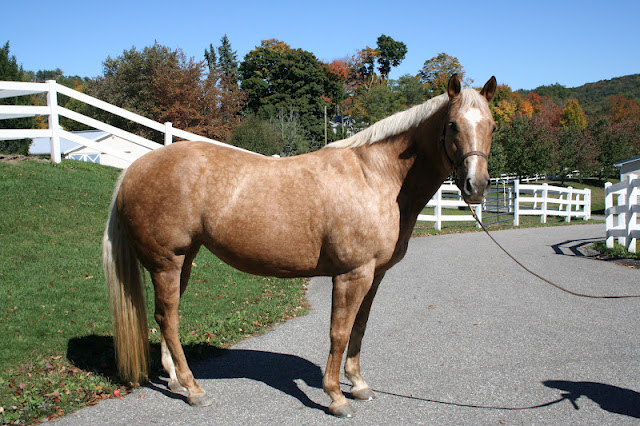 This week while riding Dusty I had an epiphany of sorts.  When cueing Dusty into the trot she needs no more than a feather light touch of my calf and she surges forward.  Her pace is just a little bit too forward, and I then have to half-halt and slow her down to where I want her.

It occurred to me that it might almost seem like a punishment to her when I slow her down.  I mean, here I am asking for the trot and she gives it to me.  In the next second, I take it all back and make her slow down.  She may be confused by this conflicting set of cues.  Or she just thinks I’m crazy and don’t know what I want.

So after discussing this with my trainer/daughter, we both agreed it would be best for Dusty and myself to set her up for success.  By this I mean that, while walking, I get the positioning and pace I think will make it easier for her to succeed, and only ask for the trot transition in a situation where she is balanced and positioned in such a way that she is not likely to blast off in the first place.

We do this on a circle, starting at around 20 meters.  Once she was relaxed and paying attention, we’d walk a smaller circle about ¼ of this in just one corner of the arena, and ask for the trot just as we were heading into the corner from the center of the arena, so there was plenty of rail and corner for support.  Dusty wasn’t asked for the trot until we were all satisfied that she wouldn’t shoot off like a rocket.  You can feel when the time is right to ask just by the softness felt through the reins and the swing through the back.

If the transition went smoothly and the trot was quiet and soft, we continued through the turn and trotted on the 20 meter circle.  If the trot was speedy or resistant, we stayed on the ¼ arena corner circle until it was under control, came back to walk and started over.

With just a few tries, I did get a consistently nice transition and pace and an even nicer halt this way.  We repeated the whole process in the other direction with the same result.

We’ve decided to keep working with Dusty this way until she realizes that the trot doesn’t have to be at Mach 10 all the time.  If we make it easy for her to succeed when she does it right I’m sure she’ll pick up on it quickly, she’s a smart girl.

I think it’s a good training concept to set all the horses up to succeed and make them feel good about their jobs.  Who wouldn’t feel good about getting it right instead of wrong most of the time?  It’s a good way to instill confidence in a horse and in humans for that matter.  We all need to feel good about ourselves and in turn it will make us happier with what we do.

Postscript:  We worked on this today again and even though it’s been five days between rides she did wonderfully.  I set her up with the walking circle and it took less than half the time as a few days ago.  We trotted at a leisurely pace in both directions without a misstep or change of pace.  The halt was square and right on the money.  We kept it short, gave her lots of praise and treats when we got back to the barn.

I’m very proud of her. It seems as if she might be saying something like “If you just tell me what you want in a clear and concise manner, then I’d be happy to oblige.”   At least that’s what I hope she’s thinking, but with Dusty you just never know.

Until next time
Quote for Today
A horse is an animal not a machine and is only as good as it's rider.
Posted by Grey Horse Matters at 5:22 PM