Recently, I’ve been thinking about a horse we used to have and wondering what his life is like now or if he’s still alive.  I have no idea why Norman has popped into my head for the past week but maybe it’s time his story was told.
We were boarding at a facility and the owner got this adorable black cob/draft horse in with a horrible injury to his back leg.  The skin was literally sliced to the point of hanging slightly off the leg with crusted blood and oozing.  I have no idea what the deal was between the barn owner and the dealer, but Norman was there on trial as a potential schoolie or something for a month or so and needless to say we fell in love with him.  How could we not?  He might not have been the most handsomest horse but he was surely the sweetest, friendliest little guy I’ve ever known.  My husband remarked once that he looked prehistoric... poor Norman. 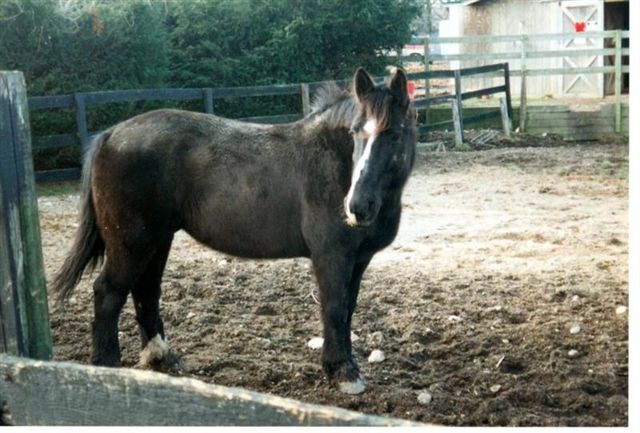 The slimy little owner of the farm hit upon a new scam to try to get his clients to buy his new school horses.  Apparently he thought he would get in sad cases like Norm on trial and then start a “Save Norman... or else” fund.  Everyone would donate money to try to keep Norm from going to auction and the killers.  And people did donate, only they didn’t come up with quite enough money, so when the truck showed up to take Norm away, it was too late.  When the dreaded kill truck showed up, Norman was loaded onto it to be taken to auction.  I received a frantic call from my daughter that Norman was leaving for the kill pens and could I come down with the money to buy him.  Now, at the time I didn’t have any extra money lying around to spend on a horse.  My daughter, who was a teenager at the time, had been saving money for a trip and I was to bring that money for Norman’s purchase.  The driver was in a hurry and the barn was forty-five minutes from my house, so I had to hustle.  He wasn’t going to wait around for long with the promise from a kid that mom was on her way with the money.  In the end, Norman was led from the truck and put back in the barn.  Now we had to figure out how to pay board on him, vet bills etc.  My daughter went to work for the barn as a mucker, groomer and in general helped out for a reduction in board.  So it worked out for Norman.  With diligent care, Norman recovered from his injuries (thought there was some nasty proud flesh) and was a happy, thankful horse and a pleasure to be around.   (The slimy barn owner, btw, kept all the money that had been donated to the “Save Norman” fund for himself.) 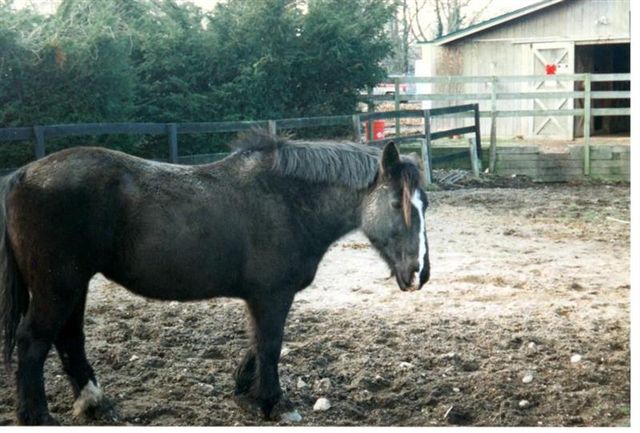 Even though he was definitely a driving horse in his prior life, I did have a ride on him one day.  It was easy to see why he made the perfect cart-pulling horse; his trot was atrocious and the most uncomfortable I’ve ever had the displeasure to ride.  No matter.  He was a wonderful horse and we all loved him.
Circumstances being what they are in life, we eventually left that barn and took Norman along and he became everybody’s darling at the next barn, too.  To say he was a character would be an understatement.  One day he ate the button off my daughter’s coat looking for treats.  He saw no need for having his sheath cleaned, when he had already mastered the technique of laying on his stomach and rubbing back and forth on his hoof to relieve his discomfort.  It seemed to work for him.  Norman also had the cutest handlebar mustachio and was very kissable.  During the time we spent at this barn there was a beginner rider and he took a liking to Norman.  The picture below is of him and Norman on a beach ride.  Doesn’t he look majestic with the surf behind him? Unfortunately, this rider wasn’t ready to buy a horse and Norman came along with us when we moved to yet another barn. 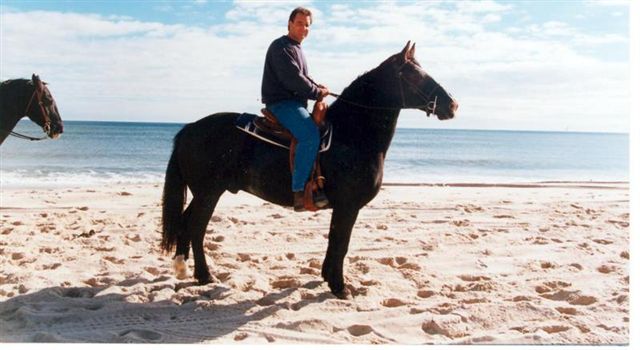 As always, Norman was a hit with all but there was one girl in particular who absolutely fell in love with him.  She would spend hours grooming him and bringing him giant jars of peppermint candy.  We thought it was wonderful that she had so much fun riding him--she was the only person in the world who thought his trot was comfortable.  Eventually, we sold him to her for a dollar and they became a great pair because they were so right for each other. 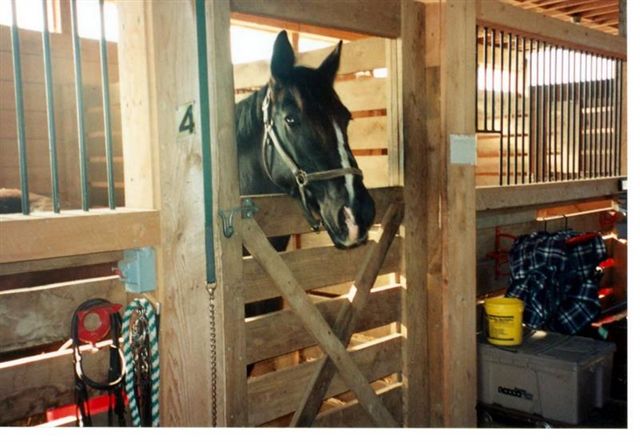 The only sort of sad part to Norman’s story is: one day when we came to the barn he wasn’t there.  In his place was a letter to us that she had to leave quickly and couldn’t get in touch with us in time to let us know.  Seems she was moving to New Hampshire to be with her father.  So Norman was gone and we didn’t get a chance to say goodbye.  I’m sure since her father had a barn on the property he was well-loved and taken care of, but I would have liked to give him a hug and kiss goodbye one last time.
I’m sort of hoping she sees this and lets us know what happened with her and Norman.   It’s hard not knowing how the horses we care for wind up.  It’s one of the reasons I could never be a breeder and seller of horses.  Wherever Norman is I’m sure he’s still the happy, sweet and friendly guy we all loved and cared about.
Until next time
Quote for Today
A horse is an angel without wings
Posted by Grey Horse Matters at 4:09 PM