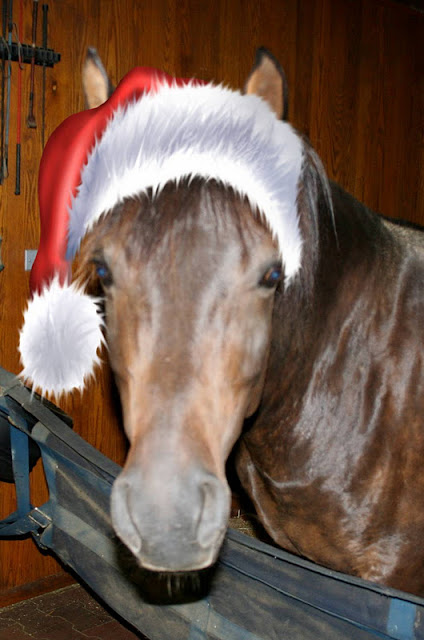 Hi, it’s me Sami—you know, the handsome, athletic Arabian. I’m a little bit late with this letter but I know you will get it because… well, you’re Santa.  For Christmas I would like some new shoes with lifts in them to make me taller.  I’m eight years old now and I thought I would grow bigger in the three years since I came to the barn.  I been trying to eat as much as I can but I’m still only 14.2 hands and I guess this is it for me.  But I really need to be bigger so the horses that live here will start takin me seriouslee.  They still don’t realize that I should be leader of the pack and won’t listen to me.  But with shoes and lifts they would be really scared of me cuz I would be bigger.

Dusty never pays no attention to me either.  She always squeals and strikes at me when I try to talk to her.  Okay, maybe I might get too close, but that’s no reason to be so rude.  I think she shouldn’t get anything for Christmas cause she’s so mean.

And Grady should get a frozen lump of manure in his stocking cuz he’s such a bully to me.  He’s the one who always wants to play, but I can’t help it if he’s the one who ends up with all the bloody cuts and bruises on him and I don’t have any on me at the end of the day.  He’s always getting me in trouble!  Grady is really sneaky like that.

Mellon is kind of cool and smart and I can see why he’s in charge.  We’re a lot alike and he’s my friend so, since he’s gettin old I think you should bring him a heated bed for his stall to keep him warm and comfy when he lays down to rest.

Blue is a jerk!  He chayses me off the hay nets or the best grass all the time.  Who does he think he is anyway?  He’s not the boss of me!  I’ll eat where I want to.  Blue should get a rotten carrot in his stocking, that wil show him.

Nate is okay but he’s so big I’m fraid he’s going to knock me over sometimes when we play halter-tag.  Plus, he’s got kind of an unfair advantage, being so big.  It’s a good thing I’m so fast!  But he’s mostly hangin round with Dusty, so we only play once in a while.  You could bring Nate some nice treats cuz he’s okay.

Donnie is okay too.  He doesn’t play much but he’s not mean to me—not most of the time, anyway.  He’s prabobly the nicest horse here and we could be friends when I get bigger and do some fun stuff then.  I guess you could bring Donnie some good treats too, whatever he askes for.

So Santa if you could help me out with the lifts for my shoes that would be all I need for this Christmas.

p.s. - I guess you could throw in some carrots and stud muffins if you got any extra.

p.p.s – well, I feel kinda bad.  I guess if you are bringing some treats for me, maybe you could bring some for the rest of the horses too, even Grady and Dusty and Blue.  But just because it’s Christmas!
The Herd and I wish you all a very
Merry Christmas!
Posted by Grey Horse Matters at 3:12 PM