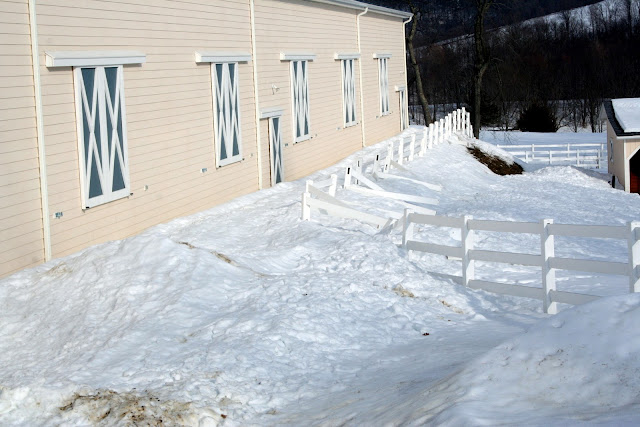 Last week we had an avalanche come sliding off the indoor arena roof.  Unfortunately, it took out a section of the paddock fence. When it originally came flying off the roof there was so much snow on the ground we couldn't even see most of the fence line.  Now with the melting the damage is more visible.  We'll have to fix it when we can get to it.
I'm so lucky that I decided not to ride that day because, twenty minutes after my decision, this happened.  Not only would I more than likely have been airborne with the racket it caused but it also blocked the door.  With the snow half way up the door there's no way I could have opened it.  The front doors were iced and snowed shut also.  In my younger years I would have climbed out the window and dug Dusty out; now, not so much....  I'm thinking that this year it would be a good idea to install a phone in there for emergencies.  Just in case.
The herd hasn't figured out yet that, properly motivated, they could climb the hill and be free of the paddock.  They still wouldn't be able to get off the property because the entire perimeter is fenced, but that's not to say they couldn't get into all kinds of mischief. They are as bored as we are and could use a little diversion like an escape to break up their day.

At least with our warmer temperatures the pond is starting to thaw and some of our snow is melting.  It's going to be a muddy mess but at this point even brown mud would be a welcome change of color around here.
Until next time
Quote for Today
Leave a horse's gate unfastened and he'll be knocking on your window in the night
Posted by Grey Horse Matters at 9:41 PM