How Horses View the World

Recently, I came across this article and thought it was interesting and informative. I'm always  trying to learn how horses minds work and this article on spooking caught my eye. Any new information, especially pertaining to spooking since I had the spookiest grey horse on the planet, is a plus for me. I've added this particular article to my knowledge base on  how horses think and why they behave the way they do. Hope you  enjoy the article.
Study Explores How Horses View the World
by: Multiple Authors 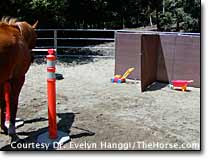 On the trail, in the dressage arena, at the racetrack, on the cross-country train--wherever horses may be, we've all seen it: the "Spook"--that sudden, bolting reaction of shock so particular to our equine friends. It might be because some animal runs up, or some object is blown in by the wind, taking the horse by surprise. But sometimes it's just something you're sure they've seen many times before--so why spook about it now? New research at the Aptos, California-based Equine Research Foundation (ERF) now has answers to that question.

According to Evelyn B. Hanggi, MS, PhD, co-director of the ERF, one theory about spooking is that objects appear different to horses when viewed from various angles. Hence, a mailbox, a sign, or a pile of bars could take on new characteristics when viewed from another side. "What we wanted to know was whether the horses could understand that the parts equal the whole," she said.
Hanggi believed they could. "If not, they would spend much of their time spooking and running away from everything," she said.

To test her theory, she established an experiment in which horses were trained through positive reinforcement to select one of two toys: a lizard rather than a dinosaur; a mower instead of a wheelbarrow; and a tractor instead of a truck. Initially these objects were always placed in the same position. But once the horses were well-trained, Hanggi started rotating the objects to see if they could still identify the "correct" choice. Positions included backward, sideways, and upside-down.
The results indicated that, overall, the horses immediately recognized the objects from many novel viewpoints, although results varied from one horse to another, and some rotations were more difficult to recognize than others, Hanggi said. Specifically, they performed best when the objects were upright instead of upside down.

"This suggests that the horses were using specific, familiar features that they learned initially in the training, when making their decisions," said Hanggi. "Their ability to perform correctly appears to be crucially linked to being allowed to observe and learn about the objects first."

The results suggest that horses that are allowed to look around and discover, whether under saddle or at rest, will be more apt to recognize objects from different angles later and might be less likely to react adversely to them, she said.

Prior ERF research has already disproved another possible explanation for spooking: the theory that horses do not recognize objects with one eye that they had previously seen earlier with the other eye only, Hanggi said.

The abstract can be viewed on ScienceDirect.
--Christa Lesté-Lasserre and Evelyn B. Hanggi, MS, PhD
Posted by Grey Horse Matters at 3:07 PM