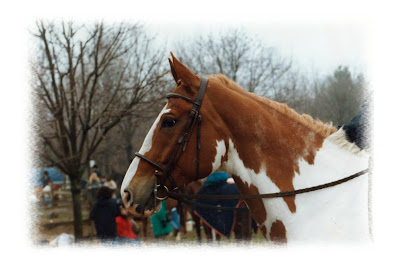 ' Lifeguard '
It occurred to me recently that my horses have absolutely no natural instinct for self-preservation.  I’m wondering what everyone else thinks about their horse’s personalities and whether or not their horses could survive if turned out in the wild.
The reason why this particular subject came to mind: I was about to drag the arena in the back field a few days ago, when I got out of the Kubota to open the gate, in the blink of an eye Nate had walked onto our chain harrow (luckily the tines were pointed down) and had to have all four hooves extricated; While extricating Nate and shooing him away, Grady thought the whole thing looked like a good idea and wedged both his front feet in the drag as well; Blue was standing in front of the hood staring me down and wouldn’t move even though I blew the horn at him; Donnie was checking out the bed in the back and had found an old halter and a rusty horseshoe with nails we had just picked up in the paddock to play with.  I swear it’s like living with a bunch of five year olds.
As I thought back over the years, many more instances of recklessness or downright stupidity came to mind, these are by no means all of their antics just a few of my favorites: 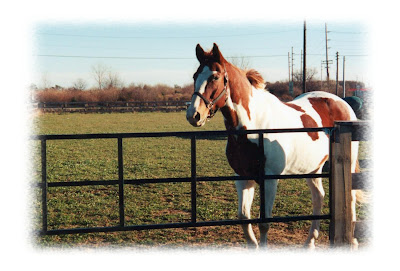 Nate is the main reason why any improvement we do on the farm starts with the question, “how could Nate hurt himself with this and how can it be prevented”?  Although, despite our best efforts, we’re convinced he could even hurt himself in a padded stall....  So I guess that our domesticated horses probably couldn’t take care of themselves if released into the wild and left to their own devices. How about yours?
Until next time

Quote for Today
Leave a horse's gate unfastened and he'll be knocking on your window in the night.
Posted by Grey Horse Matters at 12:40 PM