It's A Mare's World 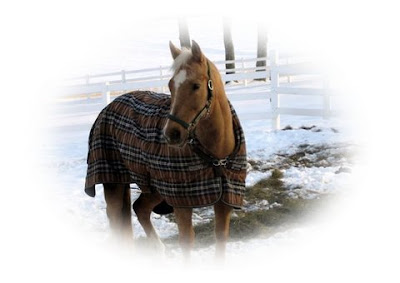 ‘It’s A Mare’s World ‘
I’ve been wondering lately about mares.  I’ve never actually had a mare for any length of time and Dusty is the first mare I’ve truly ridden.  All our horses have been geldings, except for Meg—an off-the-track thoroughbred—and she was only with us a short time until we found a good home for her. We boarded at the time and although I would have liked to keep her (she was very sweet) we couldn’t afford all the semi-rescues we were accumulating.
Okay, back to my questions about mares; I know you will all help me out with trying to understand my girl.
Dusty, my darling: quarter horse; palomino; queen bee; princess extraordinaire….  She is most likely the most unaffectionate horse I’ve ever come across. She’s very independent and opinionated about everything from her food to her grooming.  Most times she won’t even make an appearance at the gate to come in and will make one of us tromp through snow or mud to get her.  I guess she wants to see if we really mean it. We do; she’s been left out more than once and not fed dinner and yet she wouldn’t give you the satisfaction of coming in willingly the next time either.  She has the queenly persona of being able to totally ignore you and plays the la-de-la-la ‘I can’t hear you’ game!’  It seems to be one of her favorites.
Dusty puts up a very tough front but she’s no marshmallow underneath; she’s tough as nails.  She can also hold a grudge for what she perceives as the slightest infraction.  It seems if I pet, groom, or pay attention to another horse she gets slightly miffed as if she’s not getting all she’s due. Yet again, if I go over to her she ignores me and turns her butt to me.  I’m not used to having a horse that thoroughly ignores me unless I have a treat, and only then she finds it in her heart to act all cute and knickers and bats her big brown eyes.
Typical female?  I don’t know if everyone’s mares are like this but I’d like to know if is it just Dusty or are most mares similar?  Sweetie is very different; she likes attention and returns affection when given, which I attribute to her being happy and grateful to be with us. Our little Meg mare was as sweet as could be and loved attention too. So to me Dusty is an enigma wrapped in a mystery.  I’m sure I’ll never have the bond with her I had with Erik but, in my opinion, I think she could be a teeny bit more friendly.
The geldings are all so affectionate and huggable and love to be fussed over.  Typical males? Blue or Donnie will come running if they see me by the fence or I call them. Call Dusty and you get the shrug and cold shoulder.  I’ve even thought that because the mares are still au naturale and the geldings are, well, geldings that might have something to do with her behavior. Then again, we boarded a stallion once at our barn and he loved his mom and was very affectionate to her (then again, he was also a sort of a wussy boy.)  But Sami was a stallion when he came to us and he is also an attention sponge.  So that may throw my au naturale notion out the window with the bath water.
One quick, funny story about stallion mama/owner. At a dressage clinic we attended, she asked the clinician (a big name trainer) if maybe his trouble engaging his hindquarters was because his (you know) were too big.  My daughter was so embarrassed by this asinine question she almost fell through the arena floor.  I thought it was funny.  Do they make jock straps for horses?  But I digress….
Back to Diva Dusty. By the way, I tried to change her name because Dusty was so common for a palomino, but she would have none of it so “Dusty” she has remained.  She knows her name but chooses not to listen when called, sort of like when my kids were teenagers. 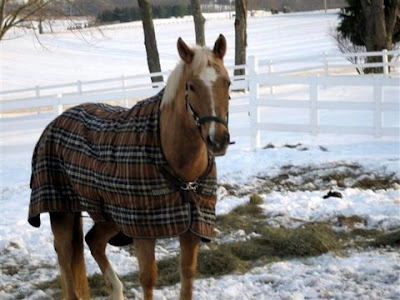 Now on to listing her good points, because I don’t want to seem like I don’t appreciate her, I do.
·         She is one of the safest horses we have in the barn.
·         She loves to work and learn new things.
·         Great on trails.
·         Loves an adventure anywhere.
·         Never spooks.
Does this sound like a sale ad?  It’s not.  Dusty’s mine until the end; I just wonder how many other mares out there share this star persona. I wonder if part of her personality is because she is smaller than all the other horses we have except for Sami. Maybe she feels she has to be tough to prove herself in the herd. Regardless of why she acts like she does, Dusty is a dynamite package, all 15’1 hands of her.  She’s a real character and I do like her, but she is frustrating. 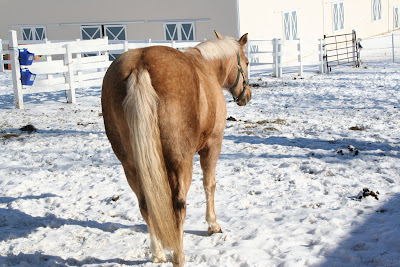 Until next time
Quote for Today
An owner about her (Appaloosa) Mare - "She will do everything and anything I ask her as long as she thinks it is okay!"
- Mary Ann Holan
Posted by Grey Horse Matters at 8:39 PM