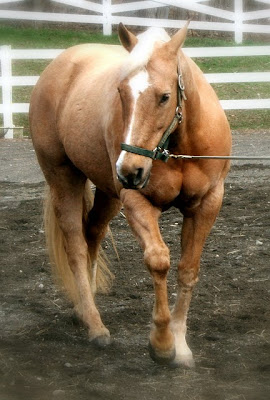 ‘Dusty’  Answers
Thanks to everyone for their comments and insights on mares. In answer to some of the questions I received in the comments section of “It’s A Mare’s World’ about Dusty's previous circumstances, some of her background may possibly explain why she is a little less affectionate towards me and a thoroughly independent mare.
Even though Dusty was thirteen last July, she’s still as green as grass.  How is it possible that a horse of that age be so green?  Circumstances; I bought her when she was five, returned her 6 months later because of dangerous behavior, took her back at the request of the seller two years later, decided to have my daughter train her in the basics and resell her. Her dangerous mounting block behavior was eliminated and there were no more incidents of flipping herself over. Oh, and did I mention that she had a fracture of her leg that required stall rest for a time?  Dusty told anyone who would listen, “I broke my leg you know!”  Of course, she didn’t tell anyone that she injured herself by kicking the daylights out of her stall wall at night because she is a witchy little mare and the occupant of the adjoining stall was simply annoying her to distraction.
During this time we had a small business operation and she became our advanced riders’ project, under the supervision of my daughter, who is a wonderful trainer. Running a demanding boarding/lesson business left her training sporadic at times. I didn’t have the time to ride her, as I had my horse Erik to ride and, in the back of my mind, thought that she would someday be sold.  Subsequently, I didn’t want to get attached to her as it would be harder for me to let her go when the time came.  This is how she comes to the dance: still green with a slightly confused attitude about why she is my star pupil all of a sudden. I should mention that I rode in fits and starts for the year prior to my knee replacement surgery, partly because of the pain in my knee and also due to the fact that my horse Erik had died unexpectedly from colic.  Most of that time, I really didn’t feel like riding. Thankfully, all that has changed now due to the surgery and healing that time brings with it.
Last June I finally got on her and we've been in mutual training since then.  With extended breaks this last winter due to poor weather conditions, it’s fair to say our training is less than what I’d like to be doing. Hopefully, with the warmer temperatures we’ll have more time together.
I have yet to know why I kept her when circumstances all point to the fact that I probably should have let her go. I’ve come to the conclusion that perhaps there is a master plan for all that happens in the universe.  I’m not terribly superstitious but it just defies reason that I would have kept a horse I basically never planned on riding again. Did I mention that in the 6 months I had her Dusty won the prize for unseating me the most number of times in the nonstop express to the ground?  I believe it was 2 or 3 times. This was a record for me considering I had never fallen off Lifeguard for all the years I rode him and in the 15 years I rode Erik the number was also 3.
I can only conclude that she was waiting in the wings for me to see that she is perfect for me at this stage of my life. She's the horse I wanted when I first laid eyes on her, so I bought her; she's the little brat I couldn't handle, so I sent her back; she's the golden trinket that kept turning up until she couldn't be turned away any longer. I have had her for 6 years and ridden her since last June. We have a lot ahead of us to accomplish, but we have plenty of time to do that and get to know one another again – and in a lot of ways, for the first time.
I feel she will come around eventually, as long as it's her idea. She probably hasn't forgiven me for sending her back because horses never forget and mares are less forgiving than geldings, in my opinion. Now she has to believe she can trust me to be her person before she warms up to me. I’ve decided we need to spend a lot more time together just hanging out and being friends before she will “let me in” to her affections. If she doesn’t, then I’ll be satisfied just being the best we can be for each other day to day. 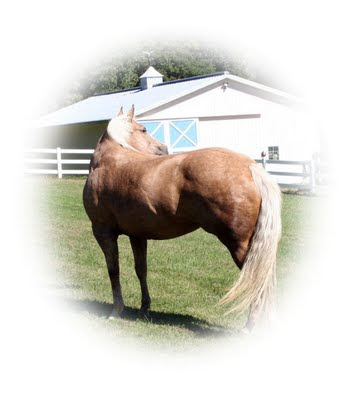 Until next time
Quote for Today
A horse doesn't care how much you know until he knows how much you care
Posted by Grey Horse Matters at 10:42 PM