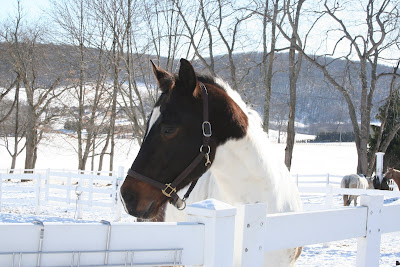 This is how today is going so far.  Morning turnout wasn’t its usually smooth get-the-horses-fed-and-out routine; instead, we had a slight incident (although nothing too unsafe happened.)  Grady had his halter and lead rope on as I went to put on Sami’s. Usually, all the horses stand and wait for their turn so, as I was haltering Sami I threw the rope over Grady’s neck and he decided to check out Mellon’s empty stall, so I let him wander in. For a big horse, he’s quicker than you would think.  He decided to amble down the aisle and out the door before I could grab him.  Of course, the lead rope slipped from his neck and he was now taking baby steps because he would step on the lead every few steps and stop himself.  He made it half way down the driveway before I could catch him. Not a big incident but, note to self: I have to remember Grady hasn’t been here long enough to know the stop and wait rule.

As I was sitting down to my lunch salad I forgot my water so, as I was at the sink filling a glass, I caught a brown and white flash go by.  On further inspection, I realized it was Blue.  He was loose again! Thundering right behind him were the rest of the herd.  Blue was leading the charge on the grand tour around the barn, through the trees and across the driveway.  Great.  Got my coat and shoes on and was mightily impressed that on another turn around the barn with tails flying Blue jumped a pile of construction materials on the lawn, and looked pretty good doing it!  Grady stepped on it with his back feet, Dusty went around, Nate looked athletic and impressive etc.  I’d have to head them off at the pass as they rounded the barn again.

Usually when this happens they get bored running in the same space and head further afield down by the garage and dumpster.  If that happened it would be a long day catching them.  Blue came to a skidding stop when he rounded the corner and saw me, I called him and he walked over.  Luckily the gate to the paddock was near and he was ushered in.  His expression registered unbelief that I would lock him back in but, what did he think, he was in for a treat?  Next came Nate and then Grady.  All the horses were sweaty and blowing hard. Mellon came next and Dusty was trying to slip into the barn unnoticed when I surprised her by grabbing her halter too. Guess she thought she was invisible. That’s almost all of them, now I just had to catch Donnie.  He’s a little more difficult because he has no halter today - he lent it to Grady because Sami broke his.  Sami has been being an unconscionable little brat lately.  He’s banished to the small paddock with Sweetie where one of her ‘mom’ looks sends him scurrying for cover, and he needs that right now, but that’s a story for another day....

Donnie now has a lead rope around his neck and we’re heading for the paddock.  This is the moment that Grady decides his head is way too itchy and he must rub it on the fence.  Of course, in the miles of fencing available for scratching, he chooses the 1-foot section right next to the gate where the halter rack hangs.  So, in the course of scratching, his halter catches on one of the hooks that hold the rack over the fence.  He pulls back, hooks his halter by the noseband, and takes the rack with him, including all the lead ropes now hanging off it. He’s now standing in the middle of the paddock swinging it back and forth with 7 leather leads on it doing his best impersonation of Medusa and scattering all the horses.  Enter Donnie and me; I unhook it and another disaster is averted.

Blue is our professional escape artist, and a budding locksmith.  He somehow worked the latch on the gate, which sometimes doesn’t close fully in the winter cold, so we usually tie it.  It’s my fault for the escape because I forgot to tie it with the lead rope this morning.

Still for today’s escapades I’ve got to score 1 for Blue on the "Are You Kidding Me" scoreboard and Grady gets an honorable mention.

I admit this may not be my most brilliant moment in equine management, but am I crazy for finding this adventure funny or have I just been hanging around horses too much?

How do you catch a loose horse?
Make a noise like a carrot.
- British Cavalry joke