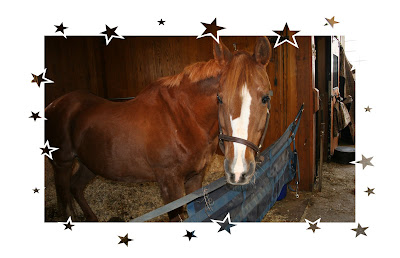 Last week I was outside doing a chore around the barn when I noticed Blue was harassing Sweetie. She was able to get away from him as he snaked his neck towards her with his ears flat back and chased her around the paddock. Sweetie doesn’t get around too well because of her age and arthritic legs, but she was holding her own. Nevertheless, my feeling was that she needed to be rescued from Blue the Bully.

When I opened the paddock gate, she trotted over and exited quickly. Sweetie needs no lead rope because she is so intelligent that she knew the routine after being with us for only a week after we brought her home. Once she exits the paddock, she walks into the barn and her own stall every time. We’ve had her for a little over a year now and she is doing much better than when we rescued her. Back to this amusing little story....

Sweetie made her escape, stopped outside the fence and looked meaningfully at Blue. Then she proceeded to march to the barn swinging her haunches and swishing her tail. She stopped at the barn doors for a second and glanced over her shoulder at Blue one more time. Sweetie was on a mission pure and simple. Once in the barn she sashayed directly into Blue’s stall, and let the water-works fly. When she was done she walked over to the window and looked out at Blue again, I swear she had a smirk on her muzzle. Then she walked into her stall and told me, “I’m done for the day; you can get my hay now!”

Quote for Today
Be wary of the horse with a sense of humor.
- Pam Brown
Posted by Grey Horse Matters at 12:31 PM