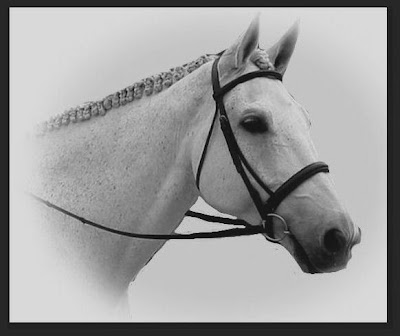 Jane’s blog The Literary Horse is now doing a series titled Creative Dismounts. If you haven’t already submitted your most memorable creative dismount I would urge you to head on over and check it out. I’m sure you will find some of the entries amusing to say the least. It’s all in good fun and it’s also a good feeling that you’re not the only one who’s done some foolish things when it comes to riding!

Below is my submission to the Literary Horse creative dismount series about my most memorable dismount:

This may not be the most entertaining one you may receive but even though I’ve had some interesting dismounts, the following one is probably the one where I hoped no one was actually watching - because if I had been watching I would have been doubled over in laughter.

The day before I was to take Erik, my 17.2 hand Dutch Warmblood, to one of our first shows, a schooling lesson was in order to fine-tune him and me. The outside arena was visibly under slushy mud conditions with puddles galore from previous rainstorms. Are you starting to get the picture yet?

We were cantering to the wishing well jump (wishing wells on either side with a gate in the center). Perfect stride…perfect distance…in two point ready to take the jump…horse puts in an extra half step…whoops, that didn’t work!

So yes, in fact I found myself dragged through the mud on my stomach…mud encrusted way down inside my full-length chaps, my unmentionables, an let’s just say I had mud in places that had never seen a mud pack previously, and leave it at that.

I looked like a marsh monster reemerging from the swamp.

At least as I slithered through the mud, head held high, I wasn’t the recipient of a muck and mire facial. Finally, the brilliant idea of ‘gee why don’t you let go of the reins, moron’, ricocheted around inside my brain like a pinball machine until it hit TILT, and I let go of my iron grip on the reins. There I was in all my glory: mud from neck to toe, but I had managed to hold my head up the whole time I was towed along behind my horse.

So proud of myself for that one. It was the least I could do to save face, literally.

Not a comfy ride home as I recall, either. Kind of squishy.

To ride is to take occasional trips into the dirt...