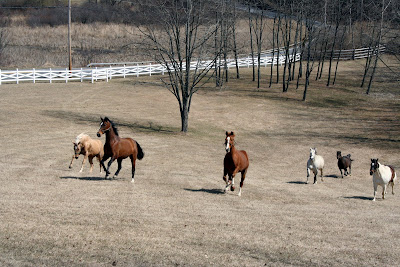 Recently, I was in our local tack store and was talking with the owner who inquired about our horses. How they were doing with Lyme this year was the topic we were discussing. A woman who was obviously listening to us piped up with the statement that: there is no such thing as Lyme disease in horses. After I closed my hanging jaw, I asked her where she got her information. She informed me her vet told her that Lyme Disease does not affect horses. Without being downright rude, I suggested she find a new vet. I am not sure how many believe this statement or not, but I am here to tell you there is definitely Lyme Disease and it does affect horses - and not in a good way.

Several years ago, when we leased a barn and pasture, all of our horses were infected with Lyme. I’m sure it was due to poor pasture management over which we had no control, no matter how much we asked for it and despite it being part of our rental agreement. Simple mowing would have sufficed to keep ticks to a minimum, as they will not hide anywhere in the grass where sun can reach them. But it got to a point where we actually had to hire someone from off the farm to come and mow the pastures to keep the weeds, parasites and tick population down. It was a horrible place and we didn’t like it but we were rather stuck there for a time. Sadly, all the horses were infected and treated but it did leave some residual effects on them.

Most people think Lyme Disease amounts to some flu-like symptoms, some achy joints, a little fatigue and then it’s over. No big deal, right? Few realize that Lyme can affect nearly every system in the body, causing a wide array of symptoms from fever and aches, arthritis, heart irregularities, vision problems or blindness, neuromuscular disease, neuropathy, and even symptoms like those of MS and Parkinson’s, to name just a few! In fact, tests in laboratory animals have shown that in just 3 hours after being infected with the disease-causing bacteria, Lyme can enter the central nervous system where it can do serious damage, cause meningitis, encephalitis, and/or seizures and even cause death. The Lyme spirochete itself is very effective at destroying nerve cells.

Around the time the horses were infected, my daughter was also infected with the typical bulls-eye rash on her stomach, but she couldn’t find anyone to treat her. One idiot doctor (a so-called “Lyme specialist) told her the rash wasn’t big enough to be Lyme – it had to be the size of a dinner plate before he could give her a simple course of doxycycline!!! Her infection not only involved the classic flu-like symptoms and joint inflammation, but also entered her central nervous system where it had some unpleasant, lasting effects including neuropathies, vision changes, involuntary muscle movements, and an array of cognitive and neurological symptoms. Even after taking several month-long courses of powerful antibiotics, she has lasting damage including being afflicted with fibromyalgia.

Finding treatment was even more difficult, as testing for Lyme is imperfect, to say the least, and many Lyme infections fail to show up in blood tests, either because the body fails to mount an immune response (Lyme is notorious for being able to “hide” from the immune system) or because the bacteria are not present in significant quantities in the bloodstream; often in such cases they will be identified in the spinal fluid through a spinal tap instead; it is also often found in joint fluid and body tissues. So the tests are a great tool, but are only part of a complete diagnosis – they often do not tell the whole story.

A patient complaining of Lyme symptoms will often be ignored, shuffled around or prescribed anti-depressants rather than being treated with antibiotics, giving the infection a chance to do real, permanent damage. My daughter finally found a doctor to treat her after months of searching, at which point she needed to see a neurologist and a rheumatologist, among others, and required a series of additional tests including brain MRIs. Having waited so long to receive treatment, she still has recurring bouts of symptoms that can be attributed to Lyme.

It is estimated that 50% of ticks in the Northeast carry the Lyme spirochete, and Lyme is common across the US and found around the world, though not every bite from an infected tick transmits the disease, nor does exposure to the bacteria necessarily mean you will get the disease.

I would strongly urge everyone to check out the links below for what Lyme is and how to spot it and treat it in the horse. Human sites can be found on Web M.D. or other medical sites. The only thing I would caution is that most sites claim that if you are blood-tested for Lyme’s and it comes back negative, that means you don’t have it. This is not always the case; it simply means the spirochetes may not be active at the time the test was taken, your immune system may not be fighting it, it may be working in another part of your body, or you may have one of the strains not tested for.

As for the horse symptoms, I have seen all different symptoms in my horses from just general ouchiness/grouchiness to joint and even – more controversially - respiratory problems. We had a horse come into the barn at one time for training and he was so super-sensitive his skin would twitch if you even tried to touch him, much less groom or ride him. We had the vet out to do a Lyme test and she said it was the highest titer she had ever seen! If your horse is exhibiting unusual behavior changes, gait abnormalities, sensitivity or unusual spookiness, crankiness or just isn’t “right,” it may be wise to consider Lyme. Also, don’t depend on a fever to help diagnose a problem - we’ve found that Lyme (in both my daughter and the horses) tended to have the opposite effect: their temperatures were lower than normal! However, I am sure this differs from case to case. In fact, Lyme will look and act different in each individual; no two cases are alike.

Another fallacy we’ve encountered over the years is that after three days on antibiotics you (or your horse) will be feeling much better. This is not always the case. Bear in mind that, when taking antibiotics for Lyme, the initial stages will often feel worse than the disease, and so it will appear the treatment is not working. This is because as the spirochete dies off it releases a toxin into the system. Being sicker after the first few doses of antibiotics may mean you have a significant infection on your hands but that treatment is working, so don’t be discouraged.

It’s a good idea to have the titers taken; we do this at least twice a year. It’s also a good idea to talk with your vet about treating with antibiotics for at least a month if your horse’s symptoms are suspicious of Lyme regardless of what the blood tests say. Doxycycline is relatively cheap, and the costs of not treating are high. They now have a Lyme’s vaccination that we are trying out in hopes it will prevent further infection in the future. 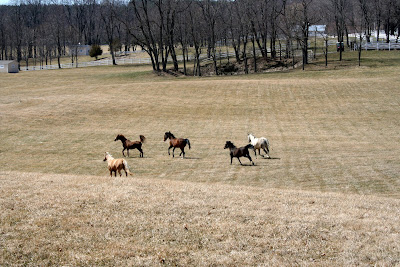 Here are a few informative links to check out on Lyme’s: 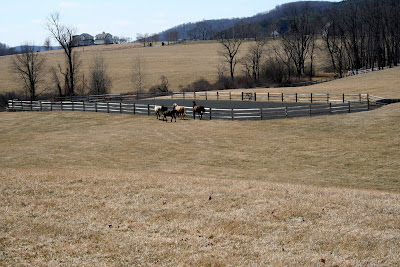 The day you put off vaccinations is the day your horse will be exposed.