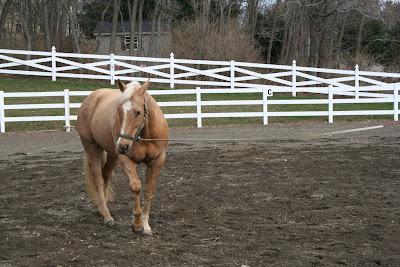 Everyone who visits here knows about my palomino mare Dusty. I do not want anyone to assume she is a bad girl, because she is not – most of the time. I would, however, like to know whether or not you have had a mare that exhibits this one particular behavior. Last night, we were running low on hay (until the delivery today), so we decided to give some soaked alfalfa cubes at night check to supplement the meager flakes they got for dinner. We feed out of round rubber feed tubs that go on the floor by their doors, and each horse had theirs filled about half way with soaked cubes.

In the past Dusty has let it be known, in her own subtle way, that she is not fond of alfalfa cubes. Put them in her feed tub with her grain and she will pick around them or pick them out one at a time and throw them in the aisle. Last night was no exception, except for the fact that she took it up a notch on the obnoxious scale.

We had a feeling she wasn’t going to eat her alfalfa, but didn’t want to exclude her, just in case. But I guess she thinks we can’t take a hint. This morning, as I was skipping through the barn like Red Riding Hood collecting feed tubs, Dusty’s bucket, not surprisingly, had all the untouched hay cubes still in it. However, as icing on the cake, she had carefully backed up over the feed tub and deposited a load of manure exactly in the center of the tub. Good aim, Dusty! Way to go!

Most would not find this an endearing quality, but since I can’t control this particular part of her behavior, I’ve decided to find it amusing....

This isn’t the first time she’s used this particular form of protest. She’s even been known to use it as a form of warfare. When we first got her at five years old and turned her out with all the geldings, she marched over to the biggest horse in the pasture and double-barrel kicked him in the side. She then proceeded to sashay to the flake he was eating, back up to it, and carefully deposit a load right on top. She proceeded to do this to all the horses’ hay, except for one clean flake that she reserved for herself to enjoy.

So my question is: do any of you have a mare with such discriminating tastes she feels compelled to “poo poo” the barn menu?

Nothing moves me more than when on the way to fetching my mare in the morning than the sound of her neighing to me as I open the gate.

Posted by Grey Horse Matters at 9:44 AM