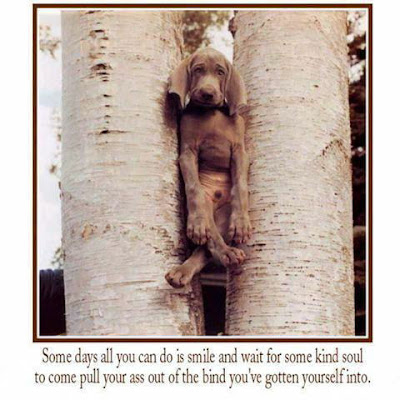 I would like to dedicate this particular “Friday’s Funnies” to On the Bit. A few weeks ago, my young friend locked herself in Texas’ stall on her first night in the new barn. I would like her to know that I am not laughing at her but with her; it is definitely something I could have easily done. Another favorite blog of mine Halt Near X recently did a post on stupid things to do with horses.

Have any of you ever done something really silly and then wondered how you were going to get out of the situation with your dignity intact? If so, I am sure we’d all love to hear about it. There have been so many instances in the past where I put myself in a predicament with no clever way out. So many times I have found myself locked out of the house and had to “break in” through a window or door, or locked the keys in the trunk of the car etc…

A specific incident stands out as my number one all time blunder. While dog-sitting for my daughter’s malamute puppy, I once again locked myself out of the house. This was not my usual lock-out though; this was my greatest fiasco. Having recently moved into a new home with doorknobs that open from the inside but remain locked on the outside, I took the pup out for his last nighttime bathroom break. As soon as I closed the door behind me, that sinking feeling of “OH NO” hit me. That’s right, no matter how many times I twisted that doorknob, or pushed on the door it was locked up good and tight. Now mind you, it was about eleven o’clock at night, pouring rain, the neighbors were asleep; everyone from the family was away on a business trip, there was no phone and two other dogs were barking their heads off in the house as I tried all the doors. The front door seemed to be the least secure so I gave it a few good kicks and broke back into my house. In the process of course, I splintered the door jamb/molding and now had to spend the weekend with no lock on the door. We live in a rural area with acres of woods surrounding us, but at least I had my killer Aussies and the malamute pup to protect me.

When my husband came home he surveyed the damage and inquired, “Why didn’t you just break the glass in a window, it would have been easier to replace”? Hmmm, didn’t think of that. But hey, then the rain would have come in; with just a broken door I could pile lots of furniture in front of it for defensive fortification or work on building a moat, so I never have to lock a door again...

Our perfect companions never have fewer than four feet.