MiKael from Rising Rainbow is hosting a horse lovers blog Carnival of Horses on June 1st, so submit your entry before May 30th and join in the fun! 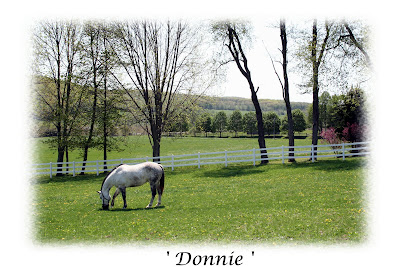 We currently have five horses. During the countless hours spent observing how they interact with each other, I have concluded that herd dynamics are beyond a doubt one of the most intriguing phenomena to investigate. The mysteriousness of how horses interact in a herd is fascinating to me, and I amuse myself with trying to figure out what exactly they are up to. So as I pull up a lawn chair to watch the herd I would like to extend an invitation to join me in observing their antics for a day.

There is no doubt that Mellon, the most senior member of the herd, has always been the leader. He’s a big, tough, aggressive Trakehner gelding who was abused and abandoned several times before finding a home with us and settling into a career as a (now retired) jumper. True to his character, he rules with an iron hoof and, in his small herd of three underlings - Nate, Blue and Donnie - none dare to challenge his authority. His toughness earned him the nickname of “the Terminator” at one of the stables we boarded at, with good reason.

On the other hand, our only mare, Dusty, answers to no one (not even necessarily her humans.) At all of 15.1 hands, she is the only one to stand her ground against Mellon and live to tell about it, and this, I believe, is why she and Mellon make such a good team; he seems to respect her.

After losing his best friend of 15 years last spring, Mellon has not been himself, as he never really bonded with any of the other horses in his herd, and the loss of his constant companion left him with no one to interact with. Adding to his misery, he injured his leg a few months ago, and has had to recuperate in a 12x12 sick pen, further isolating him from the herd. Needless to say, this wasn’t going well. So, we decided to try something different. We erected his pen inside Dusty’s paddock so they could interact; she needed a friend and so did he. Mellon usually has no use for mares, and sometimes can be hostile toward them, but we figured he’d be confined so he couldn’t do too much damage.

To our surprise, he has decided it’s all right to have a mare in his paddock, and she tolerates his antics as well, so Mellon has recently has been released back into the wild with Dusty (the “wild” being a small paddock where he can still recuperate and see the rest of his herd over the fence, while Dusty keeps him company.) This has been working out well for Mellon as it keeps him calm (well, as calm as he’ll ever be…) and, of course, Dusty has gained a companion.

Lately however, things have been getting peculiar around the farm. In Mellon’s absence, Nate has decided he is now leader of his two remaining herd mates. Blue and Donnie seem to have quite a different take on Nate’s self-imposed leadership – they seem not to have noticed. Both have decided he is no more than a substitute teacher and if possible, they would be throwing spitballs at the black board and causing trouble in general. We call them “the Three Stooges: Moe, Larry and Curly,” with Nate in the comical role of trying to lead the unruly bunch. For example, when Nate decides he’s like to roll, both Blue and Donnie amuse themselves at his expense by waiting until he is on his back and then launching simultaneous attacks on him – biting him on the rear while he’s most vulnerable. They would never even dream of engaging in such antics with Mellon, and now Nate, getting absolutely no respect from his subordinates and with his authority in serious question, is becoming frustrated with both of them.

Now here is where the odd part starts to rear its unusual head.

Although Nate seems to genuinely like all of the horses, he has always been best friends with Donnie - probably because both enjoy a near constant level of horseplay throughout the day – something Mellon and Blue have no interest in. As second horse in the herd hierarchy, Blue has always been a little antagonistic toward Donnie, who is always low-man-on-the-totem-pole. Donnie has always relied on Nate for protection. But for some obscure reason, Blue and Nate have joined forces this week and won’t associate with Donnie anymore. It’s like watching a bunch of bratty kids on the playground. Donnie has been ostracized for no apparent reason.

Donnie has always been besotted with Dusty and spends a fair amount of time flirting over the fence. Luckily for him, Mellon doesn’t seem to mind. Blue, however, has never paid Dusty a smidgeon of attention; in fact, they don’t like each other at all, and when they were turned out together in a herd situation, she’d make a point of harassing him and even backing up and deliberately pooping on his hay, while he would make an array of his meanest faces at her all day.

But oddly, Blue has also been spending time flirting and grooming Dusty over the fence. Maybe it’s just spring fever, or sheer competitiveness, but I’m convinced he’s doing it just to give Donnie the works. Nate is joining in this little game too. Donnie is always chased away, and stands sulking at a safe distance, trying to get Dusty’s attention with nickers.

Today, Mellon decided he’d had enough and gave both Nate and Blue a good bite on the neck each when they were by the fence pulling this nonsense. Mellon may be tough, but he has always been fair and kept the herd society in good order; he never tolerated anyone (except himself) abusing or ostracizing members of the herd, and not without good reason. Mellon still attempts to rule from the other side of the fence. These two little monsters have decided they are a tough gang and don’t have to listen to anyone. They found out differently today.

I hope they let poor Donnie back into the group soon. Donnie was also abused before he came to us, and he’s been through a lot. And now, instead of playing or grazing, he’s been hanging out in the shed to avoid these bullies.

I’m of the opinion they are being mean to Donnie because he still listens to what Mellon decrees. But, Donnie will never rock the boat, and tries to be friends with everyone. Maybe they think he is a suck-up or a teacher’s pet. As soon as Mellon is well and allowed back into the big paddock, all of this will be addressed. I am waiting for that day; I want to see everything return to normal, and these three really need some direction. Without Mellon, they are a ship adrift without any oars, and the two trying to row the boat are swirling it in circles of dissension. I only hope the Gang of Two do not corrupt our little Donnie in the meantime, as he is very impressionable. If he were a human, Donnie would be the sensitive, shy kid with a big heart who would do anything for you and who wants to be a friend to everyone.

But then, maybe I anthropomorphize too much. It’s easy to project human emotions and motivations onto horses when trying to understand their behavior. But I can’t help but feel sorry for poor little Donnie; he is so sad and I really believe all he wants is to be friends - for all to get along and be happy - and I hope their treatment of him won’t change his sweet, generous nature for the worse. I am reminded of the self-appointed popular kids on the playgrounds who pick on the unpopular kid because it makes them feel superior. Did Nate, in an attempt to win some respect or make himself feel tougher, single out the weakest horse in the herd for abuse? Or is there some other reason for this uncharacteristic turn of events? I don’t know, but it makes me sort of wonder if humans and horses are really that far apart in their social behavior…

Quote of the Day

O, for a morning in May... filled with the beauty of horses, soft with light of heaven
Posted by Grey Horse Matters at 8:07 PM