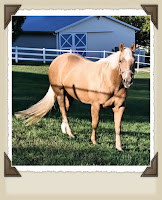 For my fiftieth birthday, my husband bought me a palomino quarter horse mare. Moon’s Stardust, aka ‘Dusty’, she was a 15.1 hand, five year old. “Yes”, I was told she is a “little green”. Okay, how green could she be I thought, at five she must know the basics.

Dusty’s energy and the fact that she went forward with little prodding when I rode her pre-purchase seemed a good thing. Her steering was a slight matter of concern, she wove around the ring like a drunken sailor tossing her head and chewing the bit constantly. All these things could be worked on over time and corrected, right?

Her ad should have read:

Nicely Started ~ lunges, but we don't have enough insurance to ride her yet.

Well Mannered ~ hasn't stepped on, bitten, or kicked anyone for a week.

Professionally Trained ~ hasn't stepped, bitten, or kicked anyone for a month.

It never occurred to me that at my age, perhaps I should not get a green horse. After riding for ten years, I had the foolish notion I could handle her basic training. To say I was in for a rude awakening with Dusty would be an understatement.

The first night in her new stall elicited pure displeasure on her part. She kicked the walls and pinned her ears at anyone who came near. I tried to groom her, and dodged threatening kicks. She harbored a real attitude and tolerated no one.

We put her in the paddock with our boys the next day; we were allotted one paddock at our boarding facility. Well she sashayed in as if she owned the place, sized up the situation and calmly walked over to Erik, all 17.2 hands of him, and proceeded to double barrel kick him in the side then walked away cool as a cucumber. Her next mission; on to the boy’s run-in shed where she determined it was a good idea to back up to their hay and let loose with all the manure she could muster up. She was acting like a bona fide witch.

During her first week, we worked on saddling, haltering, blanketing, grooming, etc. There was no end to the rudeness she displayed; she would run ahead while being led, or swing a well-aimed haunch, it seemed her ears were always pinned. I had never seen a horse with such a miserable personality.

Our policy with a new member of the herd is they are generally given as much time as they need to be acquainted with everything prior to being put in work. At her slow pace, I didn’t know how much longer she would need to acquire respectable manners. I kept trying to win her over by continuing to guide her with compassion and consideration.

Finally, she was doing well enough on the lunge, so riding was the obvious next step. Well, more good news, Dusty had major issues with the mounting block. A great deal of patience was required throughout the entire mounting process. The ‘Princess’, permitted no one to get aboard without a major disagreement, she would step backward, forward or sideways making it almost impossible to swing a leg over safely. Depending on her mood, if you mounted successfully, you might be treated to a session of spinning, running backwards or crabbing sideways,. Dusty had quite a repertoire of inventive antics to get out of work.

One episode in particular comes to mind. My foot was in the stirrup and as I was just about to swing my leg over, she trotted away with me hanging off the side, being annoyed at this inconvenience she reared. I came off still holding the reins. Looking down her nose at me with arrogance, she purposely stomped on my foot. As if to say, “so there, what do you think of that”? Instead of being angry, I thought it was fairly amusing and true to her character. A lot of patience was definitely required to deal with this horse. Dusty was a self-important haughty mare, with an appalling attitude.

Great legs and a nice rear will get you anywhere in life. Big, brown eyes help too.

When you want your way, stomp hard on the nearest foot.

In times of crises, take a poop.

Act dumb when faced with a task you don't want to do.

A swift kick in the butt will get anyone's attention.

Love those who love you back, especially if they have something good to eat.

After months of this behavior, and many deliberations she was returned to her former owner. Although, the decision was difficult for me, as I have never been one to throw in the towel, it was the best option for all concerned.

We left the boarding facility to establish our own boarding, training and sales stable. Unexpectedly we got a call from Dusty’s owner, would we be interested in taking her back and selling her for him. She had been in the field, for the last two years, unridden this whole time. When he threw a saddle on her, she threw him. To make a long story shorter, we agreed to her return for selling purposes only.

Don’t get attached to her, I was told, she was leaving soon enough. That was four years ago, and this mare is going nowhere. The horse that now occupies a stall at our barn is not Dusty. Aliens have obviously abducted the former Dusty and a new and improved Dusty now resides in her stall.

I have not ridden her since her return. As an alternative to selling her, I gave her training over to my daughter, who is a professional trainer. Dusty is now going beautifully with good manners and is ready for me to attempt to ride her again.

She still has a bit of an attitude though, if someone or something is irritating her delicate sensibilities, she will simply slam her stall door shut, with an unadulterated teenage temper tantrum. At the snap of a breaking carrot, her door will whip open and she will put on her most charming expression, until she gets the carrot. As for giving her a show name for the future, we have concluded that she needs only one name, like . There can only be one Dusty, and she thinks so too.

The moral of this tale, if you are an older rider, perhaps a green horse is not for you. You should consider a more experienced equine partner to share your riding ambitions and goals for the future.

Gypsy gold does not chink and glitter. It gleams in the sun and neighs in the dark.
- Saying of the Gladdagh Gypsies of