The month of September is winding down and we’re hopefully going to start getting some autumn like temps.  The trees are just starting to turn and the days seem to be getting a bit shorter.  I’m looking forward to more riding with no bugs and a lot less sweating!

It seems every September Blue develops an abscess in his right hoof.  When he was barely hobbling around on three legs I called the vet to come out and have a look at him.  She pulled his shoe and used the hoof testers and confirmed ,yet again, it was an abscess.  She also took a Cushing's blood test on him, he’s now 22 yrs. old, and that came back negative and within range for this time of year.  So that was a good outcome.  In the meantime I had to soak his foot everyday for a few hours and then I put an animalintex on it and vet-wrapped it and then put a boot on him.  He stayed in or wandered around close to the barn while I was mucking stalls and doing the barn chores.  This lasted for three days until he was feeling good enough to trot the fence and call for the rest of the herd that had deserted him.  I finally just let him out with them. He’d do a lot less damage to himself if he just stood around grazing with the herd than making himself crazy trotting and calling them. It all worked out fine, he knew enough to take it easy.  Blue is a bit of a drama queen when he’s injured so I’m sure once he reached the herd he told them just how miserable he was feeling and berated them for flat- leaving him in his hour of need.

The vet showed me a good trick for soaking his foot.  Most of you probably know about this but in case you don’t here goes:  You use an old IV bag (the vet gave me a few)  put cotton in the bottom, then warm water about half way full, then Epsom Salt and Betadine. Shake it up, put the hoof in long ways and pleat/fold it over in the back then tape it up with some very sticky vet tape.  Leave the hoof soak for a few hours and remove it.  Then animalintex, vet wrap and a boot.  It works wonders in a few days. I also had to stop giving him his Equiox until the abscess blew out because that or Bute would slow down the healing process.  Here are some pictures of the hoof soaking: 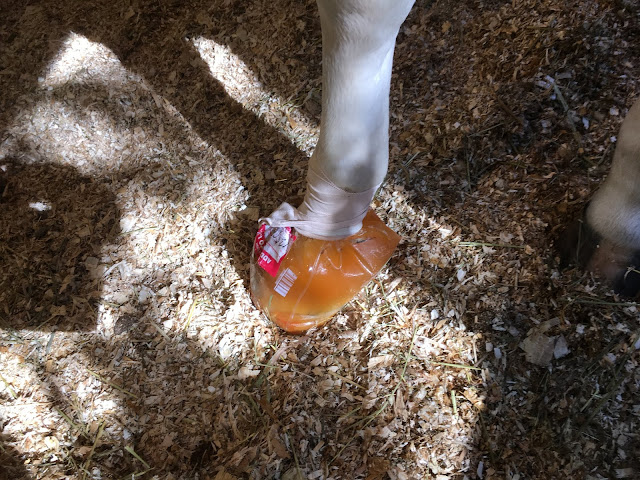 I’m happy to report that Blue is doing well now and is still wearing his boot and keeping it on (mostly) until the farrier comes in a few weeks.  His heels are a bit sore but the boot comes off at night to let him air out a bit.  So hopefully, there won’t be any more abscesses until his next yearly September one.

Give a horse what he needs and he will give you his heart in return.
Posted by Grey Horse Matters at 4:25 PM