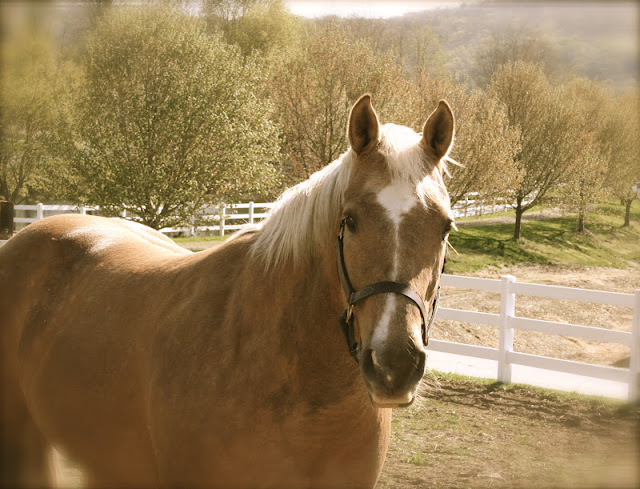 The last time I rode Dusty was April 17, 2011.  Saturday was April 7th, so it was almost fully a year that my girl has been recuperating from her laminitis/founder and some serious suspensory injuries.  All of that is behind her now and we had a lovely first ride.  Not to say it was perfect because that would have been asking too much of her.
Surprisingly, she stood like a little trooper at the mounting block while I got on.  I fully expected her to trot off but she simply walked off as if it hadn’t been a year since she was ridden.  There were a few times though, that her enthusiasm to be back in work got the better of her and she did break into a trot.  Which had me bringing her right back to the walk.  She’s only allowed to walk until she builds her stamina back up and develops proper muscling.
At the walk we worked on relaxing her and having her stretch her head/neck down and round her frame.  This was accomplished by a soft opening inside rein with a steady yet following outside rein angling in a straight line back towards my hip. These rein aids work like a charm to relieve whatever tension a horse might have.  She got to the point where she was tracking up nicely too.
I was very proud of my girl and she got lots of rubs and treats.  If it was any other horse I’ve had in the past I might have been a little apprehensive about getting on for a first ride after a year off. Dusty’s personality is so sensible that there was not even a hint of nervousness on my part.  I know it surprised me too!
So, we’ve started back and hopefully she’ll stay healthy so we can both enjoy many rides in the future.  It’s good to have her back…
Until next time
Quote for Today
Correction does much for the horse, but encouragement does more.
Posted by Grey Horse Matters at 10:08 AM