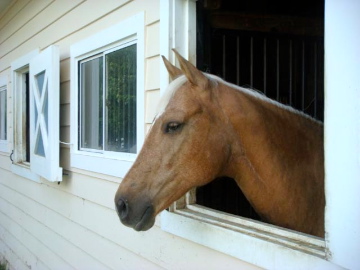 Normally, I have a long-standing rule that I never ride on April 1st.  Being a somewhat superstitious person I decided to never ride again on April 1st after I had a pretty bad wreck about eleven years ago with Erik: we were riding in an outdoor ring, it was cold and windy and a jump standard blew down on the side of us, he jumped and spun sideways and off I came.  After my debacle with Blue this past Autumn I’ve also added to my not to ride “when it’s list” windy days, when a storm is coming or when he doesn’t look safe.
Last night I don’t know what was setting the entire herd off but they all came galloping up to the catch pen like they had a rocket up their butts.  Blue who claims the title “laziest horse in the barn” was the leader of the pack.  Head down, bucking, chasing Nate away from the gate, it just wasn’t like him.  Naturally, I assumed he knew the following day was April 1st and was reinforcing my intent not to ride.  This morning on the way out he blasted off when I opened the gate and took off for greener pastures.  Usually, he just takes a drink and moseys off. I was sure I made the right decision not to ride.
Although…yesterday I lunged Dusty and she did beautifully, which led me to the conclusion that it was time to take us for a stress free walking ride after almost a year.  She was ready and so was I.  My time-honored rule/superstition be damned, we were going on our maiden voyage today. From head to tail I did a beautiful job grooming her if I do say so myself.  When I tried to pick up her left front leg to clean her hoof she pulled back and jumped to the side and broke the crossties.  This isn’t like her and upon further examination I noticed she was resting her left hind and the suspensory was a little swollen.  Great.  Apparently, on her run up with the rest of the herd last night she must have hurt herself and was in pain.  She got a treat and I put her out with her grazing muzzle and told her “no more running today.” Hopefully, this little injury will clear up by itself and we’ll be able to take that first ride by next weekend.
So it seems my bad luck is still holding out for April Fool’s Day!
Until next time
Quote for Today
My horses are my friends, not my slaves.
- Reiner Klimke-
Posted by Grey Horse Matters at 7:15 PM