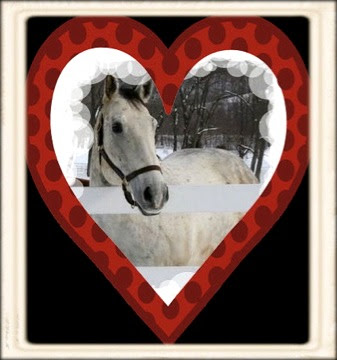 For Valentine’s Day I thought it might be fun to do a post on one of the horses.  My pick is Donnie.  I love all the horses in the herd, but Donnie holds a special place in my heart. I’ve posted a little about some of Donnie’s struggles with emotional and physical stress over the years, and through all of it he has remained as sweet and loving no matter his fears.
When we first brought Donnie home, he had lots of new situations to get used to: staying in a stall, accepting halters, blankets, grooming, hoof trimming, saddling and riding.  It was clear he’d had some rough handling before he came to us, and it took a while, but we finally earned his trust; today he’s a pro with most of these situations.  But not long after we began working with him under saddle, he had an unexplained meltdown when a dog lunged at him in the indoor of the farm we were at, and hasn’t been able to be girthed and ridden normally since.
We still haven’t been able to ride him as my daughter did when we first met him.  The truth is, we’ve never really pushed the issue.  Once Donnie’s problems began, riding him again never really became a top priority, though we have continued to work with him in other ways, just to keep a trusting working relationship with him going.
But after all of these years, with patience and trust, his physical and emotional problems have subsided, and now it’s a matter of getting his memories to take a backseat so maybe he can have the confidence to carry a rider without bucking.  He’s slowly getting used to a girth around his belly and accepting it without a meltdown.  He’s even let my daughter get on and ride a few times without getting worried.  We don’t have any grand plans for him, but we want Donnie to know he can trust us no matter what, and that he’s got nothing to fear.  We’re working on it slowly and he’s coming along.
Donnie tries so hard and never wants to cause any displeasure.  Just last night Dusty didn’t want to come in and was intent on leading an exodus back to the pastures.  Donnie thought about following her, but when I called him he turned and looked at me, he fought a battle with himself whether to follow the herd or to listen to me and come in.  He came in even though it was probably against his instincts.  This is one more reason why I love this horse.  I don’t know of any other horse that tries so hard to please, but he does.
He’s also a people-horse.  He’s the first one to nicker a greeting when we walk into the barn because he’s genuinely happy to see us.  If either of us is having a bad day or doesn’t feel well, Donnie will know and you can tell he cares and wants to make it better.  His eyes and face are very expressive; it’s always easy to know what Donnie is thinking.  He’s a horse that craves human interaction, who will gently take you by the sleeve and pull you over to the front of his stall when he wants some attention.  Every night you can count on Donnie for the best horse hugs, too.  One only needs to stand in front of him and hug his neck and he will hug you back.
Donnie is one of the sweetest, gentlest horses I’ve ever known.  Somehow, through all his trials and tribulations, his disposition has remained kind and caring.
Happy Valentine’s Day, Donnie.  You are truly the horse of my heart.
Until next time
Quote for Today
In the steady gaze of the horse shines a silent eloquence that speaks of love and loyalty, strength and courage. It is the window that reveals to us how willing is his spirit, how generous his heart.
Posted by Grey Horse Matters at 7:42 PM