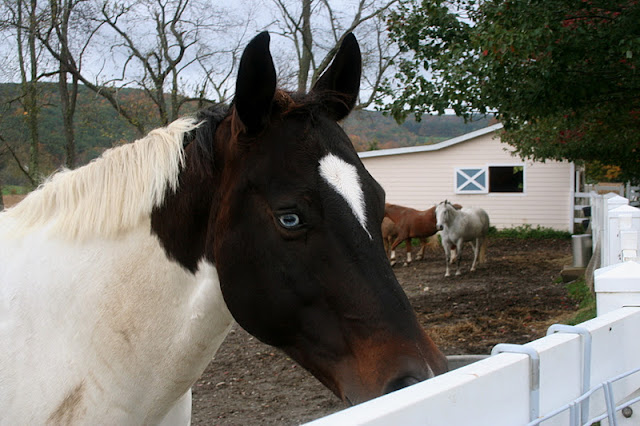 I had planned to try and ride the day after Thanksgiving, but sometimes all good intentions go astray.  The entire herd decided that the weather was way too nice to make an appearance for dinner and come into the barn for the night.  Personally, I think Blue had something to do with their decision.  I don’t know whether he has a Ouija board or ESP, but somehow he knew he was going to be ridden so he must have talked them out of coming in.  We left the barn lights on until seven p.m. but when they were a no-show, we put the feed tubs away and closed down for the night.  They know the rules:  be home by seven for dinner or you don’t eat.
Saturday morning they showed up for breakfast around eight and we brought the feed tubs into the catch pen.  I waited until Blue had finished his tub and brought him in.  After a thorough grooming to get the ground-in mud off and a de-burring session we were ready.  The time had come; it was exactly four weeks since we parted company and I landed on the ground.
I feel it is important to get back on as soon as you are able after a mishap concerning riding.  If not for your own mindset, then for the horse’s thought process.  How can we know what the horse has been thinking about since he lost a rider?  Each horse has a different personality and handles situations differently.  I’ve been off a few different horses and each one treated the situation in their own way.  Erik would come over to see if I was okay, Dusty would just stand there and give me a disdainful look and Blue galloped a few laps around the ring as I was laying on the ground [and then stood staring from across the arena with a look of alarm.]  This may be the first time anyone has ever actually fallen off of Blue and I think he didn’t know what to do.  So I think it was important for me to get back on and show him we’re still a team and everything is all right.
We went down to the arena and introduced him to the new built-in mounting block in the corner… he couldn’t care less.  The geese were screeching as usual in the pond outside the windows.  I mounted and we went for a leisurely walk around the arena on the buckle.  Then walked a pattern over some cavelletti followed by two trot circles in either direction.  Blue seemed fine, if a little lazy due to his being tired from wandering all night.  I can just picture them all out there having a poker game, smoking cigars and Dusty bringing them their drinks.  He got lots of treats and lots of praise, so hopefully all is well in Blue Land.  As an example of Blue’s mentality, yesterday he was the only one all the way in the back pasture grazing with not a care in the world.  The rest of the herd was in a totally different pasture all huddled together grazing.  Go figure, he’s a horse of a different nature who never ceases to mystify me.
To wrap it up, we had a quiet short session that we will build on as we both get back into shape after four weeks of unused muscles—both in our bodies and in our heads.  Oh, and they stayed out again partying last night, the weather has been in the unheard of sixties and I can’t blame them; I’d be out under the night sky with a billion stars surrounding me too.
Until next time
Quote for Today
When you are on a great horse, you have the best seat you will ever have.
- Sir Winston Churchill
Posted by Grey Horse Matters at 11:02 AM