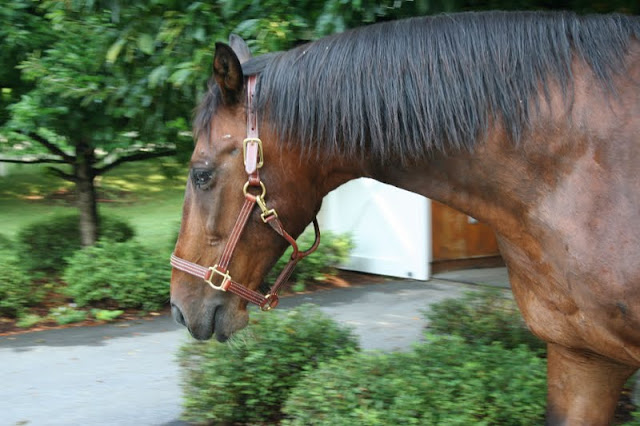 Barn Thoughts
(Because I have nothing better to do while mucking stalls)
As my daughter and I were doing the barn this morning we had a discussion about how most barns /horsemen don’t let their horses sort of wander around and interact with other horses and people.  Every morning Mellon is haltered and let out of his stall to groom to his hearts content. Other horses are put out and when he’s done grooming he walks over to the gate to be let in the pasture.  When bringing the herd in from turnout, Donnie is usually a free agent because he needs his Dusty fix for the day.  He’ll visit with her outside her window until she squeals (because that’ s just what Dusty does) and then he’ll casually stroll into his stall and wait for someone to unhalter him. We’ve never really had a problem with any of our horses coming in or going out.  Although, left to his own devices Blue might casually mosey up a hill in the front to get the best-untouched grass.  Sometimes at night he’s nowhere to be found so we’ll leave the gate open for him and by the time night check rolls around we’ll find him in his stall peacefully eating from his hay net and occasionally checking his bucket for his dinner which doesn’t arrive until you are in for the night.
I should mention that this discussion was triggered by Dusty inspecting the stalls that were just mucked and making sure she got the same hay as everyone else.  After she was assured we were doing a good job on the stalls she parked herself in front of the closed tack room/treat dispensary and nickered a few times to let us know she wouldn’t mind a carrot for her mid-morning snack.  After all, keeping tabs on her employees can be tiring and stressful, which can only be appeased by treats.
Of course, we’re not saying this would work in all situations.  In boarding barns it would cause chaos.  Around here, though, at a small private barn we have no reason not to let them explore because there is nowhere they can really get into trouble or injure themselves.  The entire farm is gated and in some areas double fenced.  Believe it or not they can’t even fall off a cliff if they wanted to.  I personally think it gives them the freedom to think for themselves and become accustomed to unusual things and desensitized to common occurrences that might spook other horses.  They are now used to hordes of bikers, the motorcycle kind and the annoying bicyclers.  Tractors aren’t a problem.  We had the Kawasaki mule in the barn aisle yesterday unloading hay and shavings and after Dusty walked beside it over a stack of plastic bags, she stood in front of the engine and stared in the windshield at us.  She refused to let us move it out of the barn, even after we blew the horn and turned the wipers on.  I had to physically get out and move her outside for a while.  Blue also became an obstacle one day in the field and no amount of tooting would move him either.  So I guess it’s good and bad they aren’t afraid of much.  I think I’d rather have them used to everyday occurrences than spooking because they’ve never been exposed.
Until next time
Quote for Today
I live in a house but my home is in the stable.

Posted by Grey Horse Matters at 7:28 AM