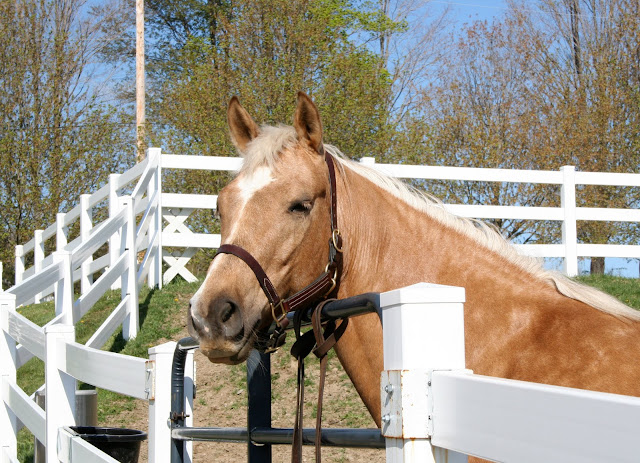 Adjusting a speedy horse sounds like it should be an easy enough task.  Not so with Dusty.  Don’t get me wrong, I love finally having a horse with a good forward motion, but sometimes she can take it too far.  Most of the horses I’ve dealt with had to be pushed along to achieve any pace at all, so it is refreshing to ride a horse that wants to go.  And go she does.  Even at the walk her speed is Mach 10.  We rode with Grady again and she overtook him at the walk.  He wasn’t very happy about that so he upped the ante.  She passed him again with a little head tossing thrown in to show him who’s the leader. If I ever do decide to go to a show (very doubtful at this point) Dusty’s the girl for the job.  Her competitiveness would certainly shift into higher gear.

In the meantime though, I’ve got to work with her to teach her how to adjust her speed before we go onto more complicated tasks.  A horse without adjustable speed could be dangerous under certain circumstances.  I should add here that Dusty’s speediness is not due to any physical problems, poor saddle fit or teeth issues.  She’s simply a horse that likes to work and is always on a mission, mostly to show me how it’s done.  She doesn’t necessarily know where she’s going, but she’s making good time ;-). For now we’ve been walking, trotting, working on bending and balance.  On our last ride I decided to take her over some cavelletti at the walk, but no trotting yet because I didn’t want to get her over-excited and quick.   That’s where the speed-control issue comes in.

I set up four cavelletti in a row in the center of the arena.  Then we would trot down the long side, ride the corner and the turn up the centerline in a nice bending balance, get straight to the cavaletti, come back to walk and then walk the cavelletti.

Her first time through she was not paying attention, causing her to bang her foot, though after that she walked through them carefully and did not touch another rail.  Then we would walk to the end of the arena in a consistent gait and alternate left or right turns then trot out of the corner down the long side again.  When she picked up speed I gave a slight half halt and slowed my posting. I feel taking her through the cavelletti gives her a focus and helps teach her to slow down a tad and be careful where she’s putting her feet.

We’ll keep doing this and rearranging the cavelletti into different patterns for a while until she decides it would be a good idea to listen to my cues.  Eventually, we’ll move on to trotting the entire exercise and continue working on maintaining and adjusting her speed with different exercises as she masters each one.

Dusty does think she’s smarter than me—and maybe she is—but since I’m the one with the license doing the driving, she needs to pay attention since she’s only got a Learners Permit at the moment.

Quote for Today
Just knowing we have both learned something when I have finished riding is enough for me!
Posted by Grey Horse Matters at 9:59 PM