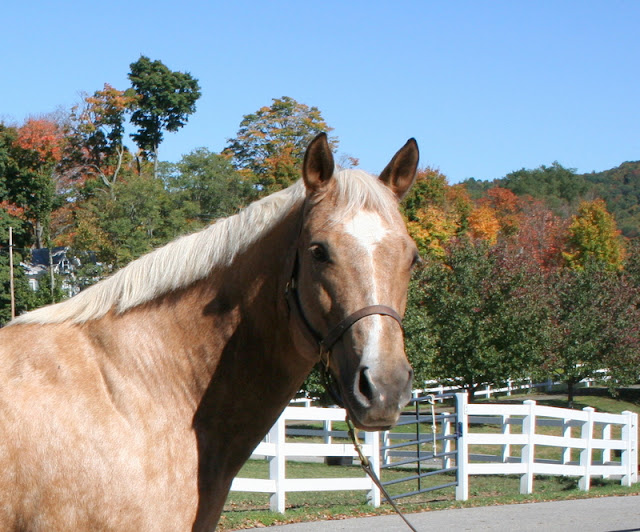 This weekend we added a new training aid to Dusty’s repertoire.  Because of her left-sided stiffness/crookedness, she needs to work on her positioning through softening and correct inside flexion.  We’ve been trying to achieve this with an opening rein alternating with an indirect rein behind the wither, a giving outside rein combined with some inside leg cues.  All worked for the most part on different circles sizes and at times spiraling in and out.  And while this is working to help keep her fresh and not boring her to death, something was still missing, so we decided to try something new.

Today we introduced her to seat aids.  Basically, it’s dropping more weight into one side of your butt or the other depending what direction you want to bend in.  No leg cues whatsoever except for creating forward motion.  Instead of using leg to help with flexion, sitting with more weight on the inside apparently causes a horse to naturally bend slightly in that direction.  That combined with the rein aids is enough to get a nice balanced bend.

It’s not as easy as it sounds, but once I got the hang of dropping my seat and resisting the urge to use my leg, I’ve got to say it worked like a charm.  Dusty relaxed, lengthened her topline and softened very nicely.  This only took maybe two times around the circle until she was a different horse.  The most amazing part is that she felt more upright and balanced through her turns.  She’s still crooked on her left side but she was really trying and she did get straighter and started to round up in her back a little.  That’s what we’re looking for, just a little try.  I should add that it was only necessary to drop the seat bones in the corners and not the entire way around; that would have been overkill and I’m sure she would have gotten annoyed eventually.  There has to be release and a lot of pats and praise, especially for a strong-willed girl like Dusty.

And so we had some very nice rides and, believe it or not, you can even steer a little bit with this method alone.  I took her over a few cavelletti’s in patterns at the walk and she did great. Then we moved onto trotting exercises over the poles for fun because she thinks she’s a hotshot jumper, no matter that the poles were on the ground!

Until next time
Quote for Today
There are many wonderful places in the world, but one of my favourite places is on the back of my horse.    - Rolf Kopfle
Posted by Grey Horse Matters at 8:48 PM