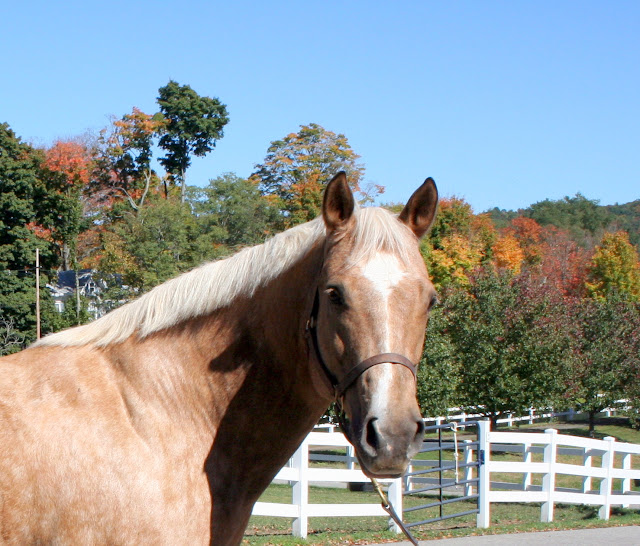 This past weekend while I was away my daughter had her hands full between watching my two dogs Maggie and Murphy and her own dog Molly.  Add to that the seven horses that needed to be taken care of and general farm chores.  She does all this everyday anyway but add my two run- into- the -road numbskulls and it becomes an exasperating responsibility.
Seeing as there aren’t too many of our horses that can currently be ridden because of one circumstance or another, I thought it might be nice to offer her Dusty for a trail ride or whatever she wanted to do with her. She’s an excellent trainer and I thought this would be a good time for her to saddle up and see how far Dusty has come and if she could spot anything I’ve been doing wrong or needed correcting, etc…
Except it seems Dusty was acting out this weekend and wanted nothing to do with her. I don’t know if it was because I didn’t show up with her carrots/treats (not that they aren’t offered when I’m not there) but still, she wasn’t being spoiled rotten.  In her mind I suppose she wasn’t being treated the way she thinks she so richly deserves.
On one fine morning she was on her way out to the paddock.  My daughter had her ¾ of the way through the gate and, when Dusty heard the lead rope unsnap went from zero to sixty backward, spun around and got loose outside the paddock, which of course riled up Mellon and all the other horses.  She took some time to be caught, refusing to come even for her favorite treats.  And the rest of the herd was too wound up to be ridden….
Later that day she had other ideas.  Usually if I call her at dinnertime she will come to the gate.  Not so this weekend.  Dusty decided she didn’t care if she ate or not and ignored any effort to get her attention.  She was adamant about not coming in, so she got to stay out with Mellon for the night.
The next night she decided to come in and grace everyone with her presence; to show her gratitude at having her stall back for the night, after dinner she completely demolished her hay net.  By this I mean she tore a hole in it, dismantled the system of dowels and snaps it hangs on and left it lying in a heap on the stall floor trashed. Oh, and she threw most of her hay out her window; either she didn’t enjoy this particular batch or was simply commenting on the service - the equine equivalent of sending your dinner back to the kitchen, I guess?  There were many more little things she did but you’d have to see her to know she was sulking.
So I’m wondering if anyone else has had a horse that acted out when they were missing in action for a few days and couldn’t interact with them.  Or if Dusty is just acting like the VIP (very important pony) she thinks she is who doesn’t like her apple cart upset?
Until next time
Quote for Today
An owner about her Mare - "She will do everything and anything I ask her as long as she thinks it is okay!"     - Mary Ann Holan
Posted by Grey Horse Matters at 10:52 PM