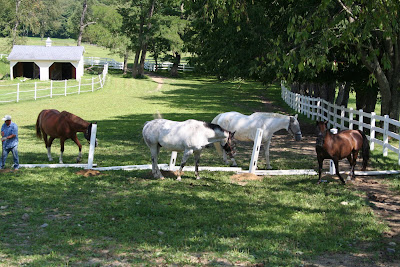 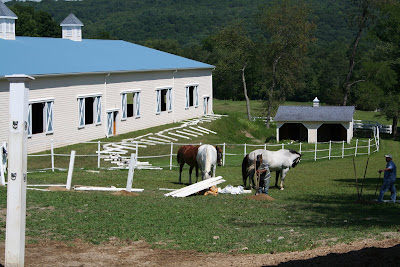 We’ve had lots going on around here lately.  The barns and sheds are being painted.  The paddock fencing is under construction.  We are moving some paddock fences and replacing some gates with metal ones.  The vinyl gates sag and are unbalanced making it hard to open and close them properly.  Especially, when you’ve got a handful of horses on the end of lead lines.
Finally, the electric fence will be taken down and we will be able to use the two-stall shed, which was previously unavailable for the past two years because of the indoor construction.  So it’s all coming along.  Today the workers took down the boundary fence to reconfigure the posts/fencing going up to the new shed.  This left a good chunk of the property line exposed with no fencing.  While the herd was in the back grazing it was no problem, but of course, whenever they decide to make an appearance up by the shed this could lead to a problem with loose horses.  We tied a lunge line across the gate opening to contain them.  And not a minute too soon, once the line was tied they all came galloping up because they are a nosy bunch.  I was amused watching the guys have lunch under the tree line inside the paddock while most of the horses were over there milling about, more than likely looking for a handout.
It always surprises me that non-horse people would not event think twice about doing things that I consider dangerous to my horses.  Like leaving the property line unguarded and open.  It would never occur to them that the horses could get loose and run down the road.  Since we have a huge hay field next to the paddock I’m talking about, they more than likely wouldn’t have gone as far as the road, but you never know.  My motto is “better safe than sorry!”
Until next time
Quote for Today
Poverty is another word for owning a horse...
Posted by Grey Horse Matters at 2:18 PM