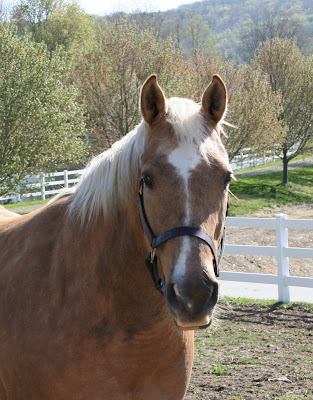 '
'Dusty'
Just a short post to fill everyone in on the goings on around here.  The contractor has agreed to pay for the tractor repairs.  The tractor company hasn’t picked it up yet but will next week.  The contractor and crew have primed the doors to the barn, finished leveling the sand in the arena and in general have been doing all the little finishing touches that need to be done.  So we’re almost there. We have contacted two companies that have a substance that would coat the sand and keep the dust down and doesn’t require watering.  If anyone has ridden in arenas or know if these products are good please let me know.  The products I’m thinking of using are Arena Kleen or Arena Rx.

I took Dusty into the indoor arena to familiarize her with being inside. We walked around the whole arena while she looked out the windows and investigated the sand with her nose.  She hasn’t been in too many indoors in her life and the times she was she wasn’t particularly impressed.  As a matter of fact, it’s one of the few times she unseated me by rounding a corner at a trot, stopping dead and running backwards rather fast.  I wasn’t ready for the awkward sudden change of direction and came off.  This was when she was five years old and hadn’t been ridden more than a few times. Let’s hope she’s a little more mature now and can rationalize working indoors.  Except that, after her antics today, I’m not so sure she’s changed her thinking about being indoors.  We lunged her for a bit after her walk around and she was very excited.  There was no way she was going to walk calmly, and the trot wasn’t there either.  However, she did a very animated unauthorized canter in both directions with lots of bucks thrown in for good measure.  It sort of validated my decision to not jump on her and walk her around for her first few times in there.  I’m of the opinion that she’s in for a lot of walking around until she gets used to the idea that you are allowed to ride inside.

This morning (Saturday) Dusty and I worked on sitting and posting trot but no cantering, as she was being very fresh.  Instead of doing cavelletti we concentrated on getting her relaxed and supple by doing bending lines on circles and figure eights.  I feel it’s always good to go back once in a while and review what she already knows before continuing with new exercises.  It gives her the confidence and inspiration to put her best hoof forward.

(Sunday)  We got a short ride in today very early this morning.  The heat and humidity around here is unbearable. Temps will hit 95 today and continue through the week.  One of the main reasons I hate summer (besides the bugs) is the heat. I’m looking forward to the autumn.  Dusty and I had a good ride; she was relaxed and bending, which made me think that it was the right decision to go back to basics with her yesterday.  She did two beautiful canter transitions in each direction and we ended with that.  I don’t think I will ride again until the heat breaks a little; I hate it and it’s unfair to her.  I wouldn’t want someone throwing a heavy saddle on me and working me in this heat and I can’t imagine she does either.  So she’ll have a few days off to think about what a good girl she was today.

On the medical front: Grady had his tendon sheath injected, the vets seem to think this may help him return to soundness.  He’s on stall rest until Tuesday.  Nate and Blue had their hocks injected Friday also, so they weren’t allowed out with the rest of the herd until Saturday night.  So, along with Mellon, we had a barn full of laid up horses covered in bandages for Friday and most of Saturday.  I’m thinking of painting a big red cross on the roof of the barn and renaming it a MASH unit.

Quote for Today
I wake up every day determined to both change the world and have one hell of a good time. Sometimes this makes planning the day difficult. - E. B. White
Posted by Grey Horse Matters at 2:31 PM