Recently I was doing some research on sitting trot and came across this article below.  The research was simply because I wanted to see how Dusty’s conformation would be able to withstand the sitting trot. She has a rather long back and she’s not yet totally fit. I’d like her back to muscle up a little more and be able to carry the saddle’s weight and me easily.  She’s a tank but still I’d like to make sure sitting trot would be comfortable for both of us. We haven’t been able to do as much fitness work this summer as I’d like. This is mainly due to the fact that it’s just been too hot and humid to ride and she’s also got an injury at present that has sidelined her activities for a while. I found the following study interesting and will take it into account when we’re able to get back to our normal activities again. Hope you find it interesting/helpful as well.
Rider Position, Horse Back Movement Evaluated
by: Christa Lesté-Lasserre
A rising trot is less loading to a horse's back than a sitting trot, producing less vertical force as measured through new biomechanical techniques, according to Dutch researchers. 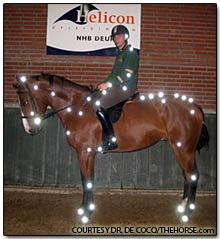 From the kinematic data of 13 riders on two horses, scientists were able to determine that two force peaks are present during each trot stride. Calculations of the rider's center of mass acceleration as it varied during the stride were used to find the reaction force between the rider and the horse's back. Comparisons revealed that for both peaks, the force was significantly lower in the rising, or "posting," trot than in the sitting trot.


A horse and rider evaluated in the study; the "lights" are the biomechanical markers.
"Biomechanical models have shown that the back of the horse will extend more if extra load is applied to the back," said Patricia de Cocq, MSc, DVM, researcher at the Experimental Zoology Group of the Animal Sciences Group in Wageningen, The Netherlands, and primary author of the studies. "The latest research shows that the two peak forces we are seeing in the rising trot are the up and down positions of the rider. Our measurements show that both peaks are less strenuous for the horse, mechanically speaking.


"However, the fact that the back is less extended in the up position means that this is where the real practical benefit lies," she said.

This would support the conclusions by the Austrian team led by Christian Peham, PhD, published earlier this year, de Cocq said. That study showed that the rising trot is less demanding for the horse's back than the sitting trot, but that the least demanding position is for the rider to maintain a raised position in the stirrups ("two-point seat").
De Cocq's research used the movements of the rider to calculate the force of the rider on the horse's back, as opposed to an electronic saddle measuring device that might cause data variation, she said.

All these conclusions do not mean riders should abandon the sitting trot, however, de Cocq said. Good training and muscle building can allow a mature horse to manage the added force.
"Young horses or those with back problems would be best trained with a rising or two-point seat until they develop the strength to carry a rider," she advised.
Until next time
Quote for Today
Horseback riding is life, the rest is just details.
Posted by Grey Horse Matters at 9:11 AM