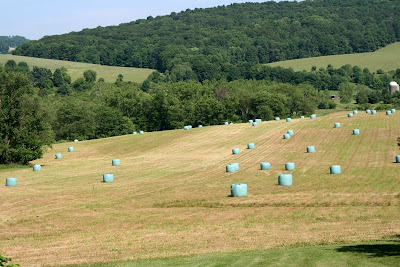 Apparently, scary aliens have landed in the neighbor’s hay field behind the house.  The horses are sure these blue pods are definitely horse-eating monsters.  I’m positive they must have seen the field being hayed during the day, but as they were coming in at night for the past few days, a lot of galloping and snorting ensued to evade these fiendish beasts.  It’s amazing how the slightest change of venue can turn this herd into silly sissies. 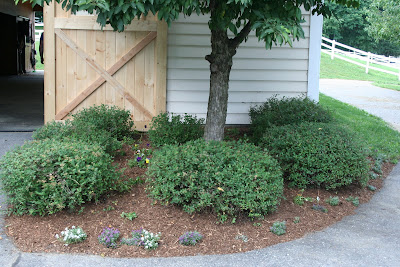 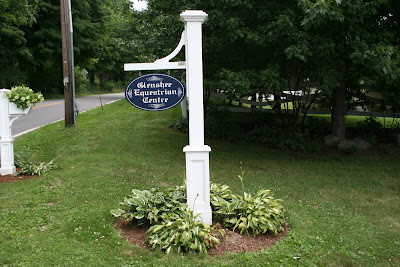 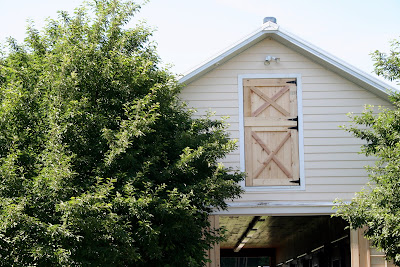 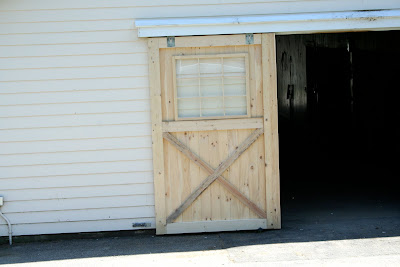 Above are a few shots of some of the gardens we’ve been working on.   We’ve had new barn doors built; the old ones were rotted and needed to be replaced.  Now we need to get them primed and painted. 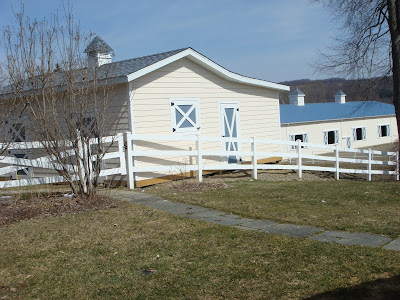 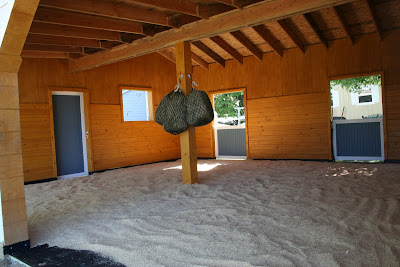 The new run-in shed is finally finished.  It’s like a great new clubhouse for the gang and they all seem to love it.  Two rotating horses get to spend the night out and have it all to themselves each night.  This has been a much-needed addition since we have eight horses and six stalls in the barn. No one has to live in the aisle or the grooming stall anymore.  It’s nice to have the barn returned to normal again. 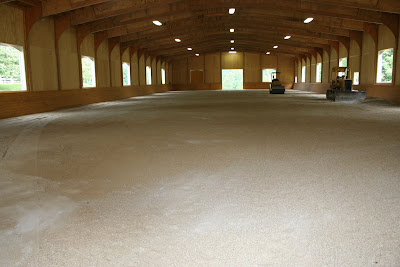 Our indoor is coming along, albeit slowly.  The stone dust is down and they have delivered the sand.  Some has been spread but there is still more laser leveling to do. Of course, they were supposed to finish it today but as usual no one showed up to work again. They must be the most frustrating company I’ve ever worked with. Argh!!! 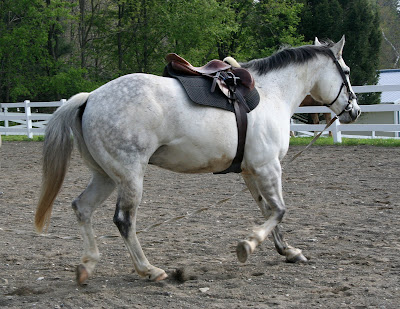 On a good note, Donnie has been working well with his saddle and le tixerant girth. He seems to not mind this girth even when he tenses up and lowers his neck. My daughter has even sat on him and ridden him around the arena at a walk and he’s doing much better than expected. Today he longed over cavelletti and was a superstar, never putting a foot wrong. We’re so proud of him for growing up. 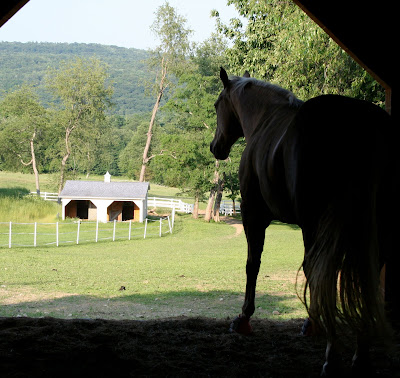 Dusty and I did more cavelletti work today and did fairly well.  Towards the end of the lesson we turned the single cavelletti over making it a small jump (not even a foot high), and as usual Dusty was enthusiastic.  She mostly trotted the pole until she banged her back feet due to her lack of attention.  It wasn’t that boring, really it wasn’t.  Next time she jumped it and cantered off but came right back to a trot.   We ended with that and will set up a small, simple course for her tomorrow.  At the end of our ride I always drop the reins and let her walk to cool off and she’s allowed to choose her own directions.  Today she chose to go over to the fence and park herself there (it’s where I always dismount) as if to say  “Okay, we’re done and YOU can get off now!” She’s a funny, opinionated mare and I get such a kick out of her personality. 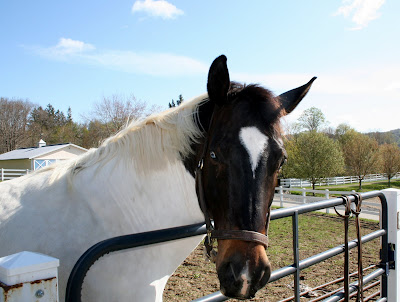 Blue and Grady are back from their three-day stint at the veterinary clinic for diagnostic tests.  Blue had a nuclear scan and lameness evaluation tests. The diagnosis reported that he is overweight (we knew that), and has some sore back muscles, mostly due to his arthritic hocks needing to be injected again.  We usually do some maintenance on him about once a year, but they haven’t been done for a long time now; we’re hoping for his hocks to fuse eventually, but if the injections don’t help, they may have to be fused surgically to get him comfortable again. 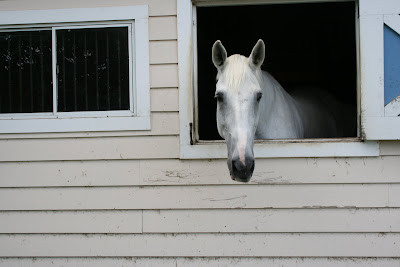 Grady’s ongoing lameness issues are still a mystery to the vets and us. For the past few months he’s been on and off again lame in his left front. We’ve had every diagnostic imaginable except an MRI (which would cost a fortune and needs to be done under general anesthesia) and tried different types of shoeing, different turnout situations and have tried just about everything else we can think of to make him comfortable and sound.  Surgery is an option, but the vets would like to try a few less invasive procedures first, such as injecting his tendon sheath on the lame side.  The last resort would be to nerve him, which we really don’t want to do if there is another way. For now we are going to pull his shoes again, as he seemed to do best without them, and see how he does with that scenario.
On another note, everyone at the clinic is in love with this gentle giant. He even participated in an assistant’s birthday party.  I should mention that this is the second time he’s been there in the last two months, as he colicked last month and had to have the ambulance bring him to the clinic for a short stay until he recovered.  He’s got quite a fan club there. I’m hoping he doesn’t have to see them all again anytime soon.
So it’s been a busy week.  Some good, some bad… but that’s life.
Until next time
Quote for Today

The only constant thing in life is change, and things can change rapidly when your dealing with horses.