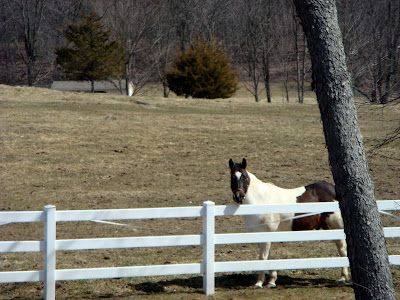 ‘ Outsmarted’
We had hoped to ride on Saturday, but plans sometimes go awry.  By the time we finished with the barn, the farrier, and some other tasks it was turning colder and windier.  We decided if the horses that needed some exercise couldn’t be ridden we would do a few minutes on the longe.

I grabbed my grooming kit, which I left outside the paddock, and a lead rope and headed into the paddock for Dusty.  Have you ever had a horse walk two steps ahead of you just out of range? Not running away, just walking fast enough so you can’t catch them.  Even though I had the lead behind my back as I maneuvered through the muddy moon craters Dusty was not fooled and kept just ahead of me half way down the fence line.  Her demise came about when she couldn’t resist a full hay net hanging on the fence; while she stopped to take a few bites I was able to snap her halter with the lead.

Once we were out of the paddock I started grooming her while she grazed on some green sprouts of spring grass. This kept her contented throughout the currying, shedding and brushing process.  As I said, it was windy and by the time I was done I was covered in white hair and could have passed for a very realistic impersonation of a Yeti.

Dusty longed beautifully even when she picked up the canter, which is her most “enthusiastic” gait, she was calm and collected.  Unlike the other night when she was a galloping bucking maniac, this time I was pleased with her performance. My daughter longed Nate, who was a total jerk, Grady who did well, Donnie who was a superstar and Sami who is starting to “get it.”  Now it was my turn to get Blue, who had been eating from Dusty’s abandoned hay net on the fence the entire time everyone else got worked.

With the lead rope in my hand and a song in my heart I headed out to catch Blue. Except that by now Blue has done the math and knows he’s next in line for some work.  Blue has disappeared.  I’m sure he moseyed away in his inimitable way; I swear if that horse could whistle he’d be looking up at the sky with his hooves in his pockets doing the impersonation of some nonchalant rambling man. We looked up and down the fence line as far as we could see into the next paddock and assumed he must be in the trees or had taken himself to the paddock way in the back.  They have access to all the paddocks over culverts and through opened gates, so we gave up.

When I got to the house and looked back at the paddocks once last time, I could just see this white splash of color behind the run in shed.  You guessed it Blue had taken himself behind the shed and was lying down - not necessarily sleeping, because he had his head up looking towards the house, [so I can’t be sure if he was lying down for a much-needed rest, or for cover.]  I’m only sorry I was too far away to get a picture. You’ve got to love this horse, he’s so smart and such an odd character he keeps me laughing.

I give him a lot of credit too; if he’s that motivated and smart enough to figure out how to ditch being worked he deserved the day off.  Next time perhaps instead of him outsmarting me I’ll be able to return the favor and work him first.


Welcome to Grey Horse Matters. This blog will address issues facing the aging rider. I will try to address the challenges of aging with our horses with sympathy, support and humor. This blog will also feature my interests pertaining to all horses and information I think might be helpful to all equine enthusiasts. In general, anything that I find amusing, helpful, insightful or just plain catches my attention or is fodder for thought or inspiration. I hope you will join me as I muddle through on my way to being a better horsewoman.