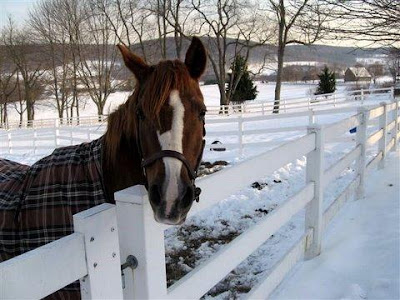 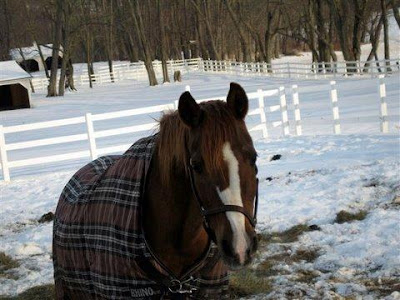 We recently had a scare with our rescued Arabian mare Sweetie. Sweetie is getting on in years, if we were told her real age she is now 26. She’s not in the best of health because of her arthritic legs; she doesn’t get around very well, but she manages. Bringing her in from turnout a few weeks ago, we noticed that she wasn’t putting any weight on one of her hind legs and was basically walking on her toe. A visit from the vet confirmed our fear: she had bowed her superficial flexor tendon. Normally this is bad enough on a healthy horse, but an older horse who has trouble with weak suspensories and dropped fetlocks behind (much like a horse with DSLD) and arthritis is much worse. We had our fingers crossed for her recovery but didn’t know if she was going to triumph over this injury.

Sweetie had to deal with some stall rest, which she protested against very vocally. Consequently, we made her a stall-sized pen outside so she could have a change of scenery and some fresh air. The trouble with this was that she, being the wise old mare she is, felt the need to lay down a lot during her recovery to take the stress off the injured leg, as well as the other weak leg, which was bearing all the weight. We worried about her getting cast under one of the panels of her pen. So we did the normally unthinkable: after about a week, we let her out into a small grass paddock. She isn’t prone to running and is sensible enough to take care of herself. By sensible I mean she was smart enough to lie down during the day when her leg bothered her and rest it for a while, she also laid down each night after dinner and her bandage change. So, contrary to all the common wisdom about rehab, we decided to trust her and hope for the best. As I said, we didn’t know how she would fare with this injury but she soon let us know she wasn’t ready to give up and has proven she is one tough cookie. She took her time, behaved sensibly and began to recover. A visit from our vet earlier this week confirmed what we were wishing for: she’s made a surprisingly good recovery and, fingers crossed, will continue to hang in there without any further injuries for a long while. So, there was no need to write her off just yet. Sweetie was staying with us a while longer, thank goodness.

We’ve had the pleasure of Sweetie’s company and her wonderful personality for about a year and a half now. Ever since she whinnied for us not to leave her in that hellhole she lived in, and we brought her and her colt Sami home, we have been treated to a truly classy mare. I’ve never seen a more intelligent, loveable, kind, gentle, appreciative or sweet mare in my entire life. This got me to thinking; at this time of year wouldn’t it be a thoughtful idea if, instead of giving some inconsequential gift to the horse people in your life, you could maybe give a donation to a reputable rescue in their name. Or perhaps donate some useable old blankets, buckets, halters, lead ropes or whatever you have around the barn in good repair. There are so many Sweeties and Samis out there who could use a little love and extra care. Perhaps you could donate some time to help out at a rescue and groom or do whatever chores need to be done for the horses.

In this day and age of instant gratification and selfishness, it would be sort of nice to start a pay-it-forward movement for the horses in need. There are just so many throwaway horses that could use a healthy dose of love and caring. The problem does seem overwhelming and it is easy to become frustrated because we cannot help all the horses in need, but each of us can make a difference, even if it is just for one horse, even if it is something small. I think of this because Sweetie and Sami were two examples of gross neglect, but they were fighters who wanted to survive and, with a little medical care and love, they are two of the kindest horses I’ve ever gotten to know. Horses like them deserve a chance. They have captured our hearts and there are horses out there who will surely capture yours if you simply give a little of your time to help them.

The horse through all its trials has preserved the sweetness of paradise in its blood. - Johannes Jensen