Dusty's Not So Excellent Adventures 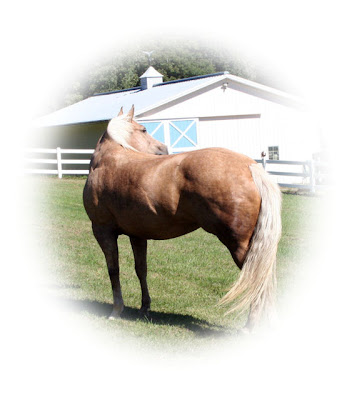 Dusty’s Not So Excellent Adventures

Dusty’s saga started on Wednesday morning when I noticed she hadn’t finished her grain.. Figuring she was simply in a hurry to get out with the herd or perhaps didn’t like her new supplements I took her feed bucket away, groomed and tacked her up for a ride. We rode for a while in the arena and she was definitely not into the lesson. Again, I cleverly deduced she was having a typical ‘Dusty Day’. We ended on a good note and I gave her a treat. Dusty is a treat monster and she took the treat but spit it out.  My radar kicked in; Dusty has never refused a treat in her life.

Wednesday was an uncommonly warm and humid day and when I untacked her, I noticed she was sweating under her saddle more than the light workout warranted.  I put her cooler on, checked her mouth, and found something odd.  Dusty had a canine tooth, which is rare in mares. It was very small and  her gums were slightly red around it.  Could she be teething at age 13 or had I never noticed this particular tooth in the past?  We checked the geldings and they had canine teeth, and then checked Sweetie and she had none. Mystery solved, apparently, her tooth was irritating her, or so I thought.  Dusty is a stoic little mare who never complains, which makes it doubly hard to decipher when she is not feeling well.  I resolved to call the vet and find out if she should have the canine removed.

After some hand grazing I turned her out and Mellon gave her a hearty kick in the side.  Mellon is a neurotic herd leader and since she did not come when he called to her, she was unjustly punished. Dusty finds him dreadfully annoying but puts up with his neurotic nonsense because she has no choice in the matter. So began Dusty’s less than excellent adventures this week.

I did a little internet research and found the following:

Between 4 and 5 canine teeth (tushes, tusks) between the molars and incisors. Generally, all male horses have four canines. However, few female horses (less than 28%) have canines, and those that do usually have only one or two, which many times are only partially erupted.

The canine teeth of the horse developed phylogenically from the simple, pointed, short-rooted tooth form of the leaf eating, in pairs living, Eocene horse Hyracotherium and served up to the Oligocene as a means of defense (self preservation). In the Miocene the living conditions of the Merychippus changed and they took to eating grass and adopted as a new behavior the life in a herd. The canine teeth possibly played an important role in fights for social ranking; they changed from a crown form to knife-like shape. In the Pliohippus the canine tooth usually remained in male horses and since the Pliocene, it contributed to the fights between stallions, to ensure that the offspring only came from the strongest animals (preservation of the species). Form and construction of the canine tooth are described and discussed in detail under the above-mentioned phylogenic and ethologic aspects. [need citation here]

One site stated that mares with canines are usually alpha mares that have a fair amount of testosterone. Dusty is definitely an opinionated alpha mare. The vet did come out and the tooth is not the cause of her problems, it does not have to be removed since it does not interfere with the bit.  She also seems to have another one under the gum on the opposite side that has not erupted.

Thursday morning found Dusty pawing and biting at her sides which were rippling with spasms.  Oh no, COLIC for sure.  Dusty has never colicked and this behavior was definitely unusual for her. The vet was on his way. In the meantime, we administered Banamine and her temperature registered 103.8. The high temperature made colic seem less likely.  The good news is that she was not colicking; the bad news is that she has contracted Ehrlichia or Ehrlichiosis, (for more info check out these sites) which is a tick borne disease. Her current treatment is three days of intravenous tetracycline and then a week of doxycycline. Dusty is showing great improvement and feeling much better.

It bears mentioning that two years ago she contracted leptospirosis  (also check out Leptospirosis Introduction ). This particular disease is caused by a spirochete similar to Lyme disease and can cause moon blindness/ uveitis.  Luckily, even though her eyes were full of puss (identified by the cloudy green visible behind her corneas) we caught it in time and avoided any damage to her eyes. Leptospirosis is generally passed on through the urine of wildlife. Possibly the opossums infected her.

Dusty has also had Lyme or Lyme disease (check out these two sites for more info), which is a tick borne disease. The entire herd has been infected at one time or another and been treated.  Since Lyme can rarely be completely cured, it remains an ongoing detection process to determine when they need to be treated repeatedly.

Have I mentioned that I detest ticks!

Gypsy gold does not chink and glitter. It gleams in the sun and neighs in the dark.     - Saying of the Gladdagh Gypsies of Galway