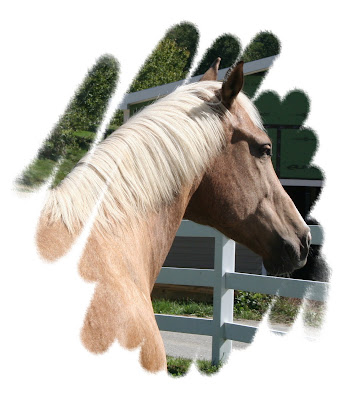 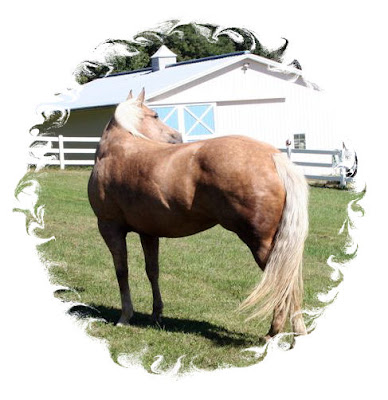 It seems my little palomino mare, Dusty, is indeed in trouble again. The scenario lately has been that she refuses to come in at night. Everyone else has no problem with these arrangements and looks forward to a peaceful night's sleep in their stalls. Not little Ms. Annoying, though; she won’t be caught, but just stands by a feed bucket on the fence as if to say, “I’ll be over here for my dinner, girls”.  Of course, this incites Mellon to madness - if she’s out side while he's inside - so the game of musical stalls is set in motion. Mellon has to go out with her, which in turn sets Sami off, since he is Mellon’s "mini-me" and won’t be separated from his hero. It is an exasperating situation and the entire barn is disrupted. Then again, during night check sometimes she’ll be ready to be taken in for the night.  "Whoo Hoo, I’m over here dearie; come and get me!”  She is an exasperating mare. She’s also been left out trying to teach her a lesson: if you don’t come in with everyone else, you’re out for the night, like it or not.

Our barn has six permanent stalls and we now have the grooming stall set up for Sweetie. That makes lucky number seven. When we got the new horse, O’Grady, we had to devise a stall for Sami. So he stays in the aisle by Mellon’s end stall.  We’ve got a makeshift stall complete with rubber mats, shavings, water bucket, feed tub and hay bag, all enclosed by a long nylon '"aisle guard" (like a stall guard that goes across the whole aisle) on the aisle side and a smaller stall guard strung between the outside barn doors, which remain partially open for air circulation.

The scene is now set: Dusty came in late one night and was directed to Sami’s temporary stall because all of the others were already taken, including hers. Harrumph! Apparently, this wasn’t the sort of accommodation the princess is accustomed to, being spoiled rotten. We found her in the morning wandering around outside the barn grazing. Naturally, Mellon was beside himself with anxiety. It seems she figured out how to pull the one barn door into the space where the stall guard was, leaving a nice opening on the opposite side, through which she squeezed her ample butt and got loose.

You might think that’s the end of her story, but you’d be wrong.  A few nights later Dusty decided to stay out again and we tried putting Mellon in her stall on the opposite side of the barn, hoping that, if he couldn't see her out his window, he wouldn't get upset.  Sami had been put in Mellon’s stall.  Well, Ms. Trickster decided she's like to come in later that night and, being one of the last ones in again, we thought it easier just to swap Sami into the aisle stall and put Dusty next-door in Mellon's stall (confused yet?)  Learning our lesson from the first time, Dusty was given a proper, secure stall and Sami was in his usual temporary aisle stall in front of the barn doors.  It appears that Sami must have been inconveniencing her and her delicate sensibilities. She proceeded to spend the night working on the barn door from her stall and pulled the door nearest her, which pulled the stall guard and the other door aside enough to let him out in the same place she had escaped a few nights earlier.   He was found grazing around the barn in the morning.  Naturally, all the horses were riled up over this turn of events. In the process of being the jailer with the key to freedom, she broke the window in the door and splintered the frame.  No one was hurt, but now we need to get a completely new frame and window.  Thank you Ms.Dusty!

So the new plan is she either stays out all night or comes in to her own stall.  She’s a genius escape artist and has always known how to open and close her door. Which she does regularly when she puts on her Garbo act of “I vant to be alone.”  Until, of course, she hears the feed cart or treats coming, then the door whips open in a flash and she puts on her "cute face." 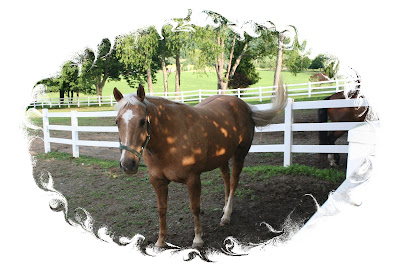 It’s a good thing I find her amusing…most of the time. 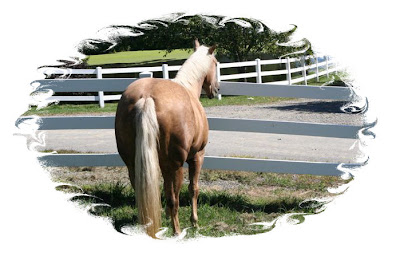