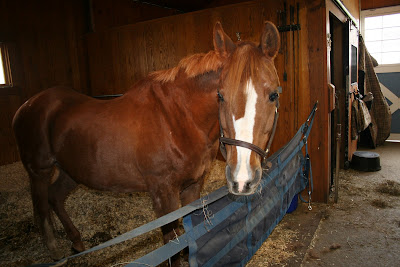 Thought it might be time for an update on the Arabian mare we rescued back in July ’08. We have very little information on her background but I will share what we do know. She is approximately 25 years old. In her youth, she was an English Pleasure national champion at one time. Her name was Princess Nabir (spelling?). When her owners moved, she was sold to the woman we rescued her from at about ten years old. The woman who bought her used her as a broodmare and pretty much had her in foal every season; I don’t know how many foals she birthed but I’m sure it was more than she needed or wanted to be forced into doing. Her last foal was the 5/6 year old stallion Sami that we rescued along with her.

As everyone knows from the original posts, Sweetie’s hooves were in horrible shape and caused some founder. She has some arthritis in her leg joints, but I suppose that’s to be expected at her age. Surprisingly, when we had the chiropractor/vet out to see her, we were told her back is fine - just swayed bit - and it’s only her legs that bother her. Her teeth were done and she was put on supplements and wormed etc… So she’s in as good a shape as she can be for now.

Now on to the good part. I’ve never had much exposure to Arabians and truthfully they would be the last breed I would ever consider. Mostly because of their size, which I feel, is too small for my daughters and me. In addition, I’m not really impressed with the way I’ve seen some of these horses disfigured and have their muzzles misshapen in the interest of a more “dishy” face by irresponsible breeders. I’m glad to see that Sweetie and Sami have the classic profile of what I would call the original Arabian breed.

Sweetie is one of the smartest horses I’ve ever met. It didn’t take her more than a week to catch on to the routine of the barn. She is so well behaved that when taking the horses in at night she doesn’t need a lead rope, we simply let her go and she walks into the barn and into her stall. This is not to say our other horses are “less smart,” but left to their own devices they would be running around the farm getting into all kinds of trouble! Yet here is a mare who didn’t know us or the barn but can find her way to her stall with no problem and causes no trouble. She has never trashed her stall, thrown blankets or buckets, etc.; she waits her turn for everything with unusual grace and manners.

When the whole herd is in turnout, she is with them yet apart from them. She doesn’t like to be alone, though she doesn’t really get close to them often. This is understandable to my way of observing. Our herd of mostly geldings is a bit rowdy at times and I think she knows she can’t possibly get out of their way if there’s any trouble so she stays off to the side a bit. She may just think they are all jerks and she wants nothing to do with them. I don’t know. I do know she is clever and has figured out the best way for herself to be comfortable and safe.

If I had to venture a guess, I would say she has never been in a herd situation or turned out on pasture for that matter. In her younger days she may have been kept in a stall because she was a prized competitor and after she was sold to this breeder, she may have continued in the same turn out situation. When we met her she was in an unlit indoor arena where I suspect she lived for years. I’m happy she is enjoying her time out now. Sometimes she just stops and looks off into the distance at nothing. I wonder if she’s actually seeing the outside world for the first time in her life. She seems so interested in everything around her, and she takes it all in with a quiet, confident patience. I guess there is something to be said for the wisdom that comes with age and experience.

In conclusion I’d like to pass along a funny incident that happened this morning. Sweetie has turned out to be an excellent groomer and Mellon loves being groomed. Mellon usually grooms Nate in the morning before going out to the paddock. But this morning Mellon went over to Sweetie instead. We assumed there would be shrieking and ears pinned and we’d have to separate them. Instead, Mellon gently began to groom Sweetie and let her groom him. Nate, of course, was beside himself, probably assuming Mellon is losing his eyesight and picked the wrong chestnut! Dusty, who thinks Mellon is her co-top-dog in the herd was especially jealous and proceeded to squirt all over the aisle (she’s in heat). Subsequently, my daughter had to tip toe through this mess so as not to get her work clothes dirty. Dusty then went out and squirted at Nate to teach Mellon a lesson and presumably make him jealous. Of course, he couldn’t care less. Even though Sweetie is no spring chicken, Dusty doesn’t like competition and so does not really get along with Sweetie; she ignores her. I’m sure she was miffed Mellon left her younger blonde self for an older woman - and a red head at that!

Sweetie also looks after the herd in her own way. Donnie had to stay inside for the vet and of course all the other horses made their way to the back field without a second thought about poor Donnie. Once out there, however, Sweetie – who never seems to take much notice of the rest of the herd – must have noticed Donnie was missing. She walked all the way back up to the top and stood at the fence near his window, occasionally calling or nickering to him to keep him company until he could join them.

I do like this little Arabian mare very much and I hope she is with us for a long time; she has brought something special to our little herd and, after all she’s been through deserves to enjoy her life for a while. 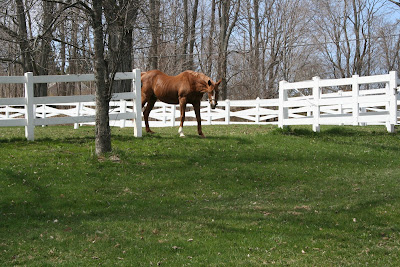 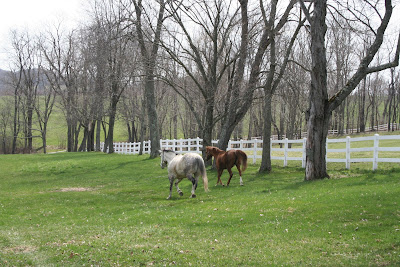 ' Donnie comes to escort her on a stroll' 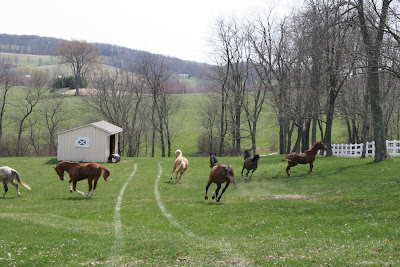 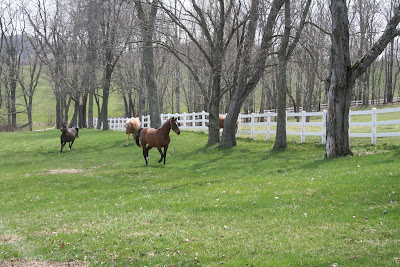 ' Sweetie' peeking out from behind the tree

After God had fulfilled his word, he addressed the newly created mare as follows: I have made thee without an equal: the goods of this world shall be placed between thy eyes; everywhere I will make thee happy and preferred above all beasts of the field, for tenderness shall everywhere be in the heart of the master; good alike for the chase and retreat, thou shalt fly though wingless . . .
- From the Koran