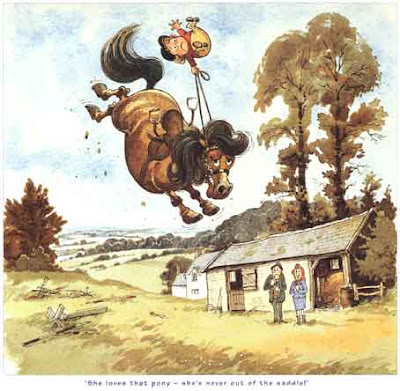 Safety and Sarcasm
I just wanted to thank everyone for reading and participating in my little survey on my previous post “For Safety’s Sake.” I appreciate your input, and reading about your experiences and preferences has been enlightening.


It’s good to see that most riders agree that a helmet could mean the difference between a safer landing after a fall or to help prevent serious injury. For those of you who disagree, that’s fine too; as an adult, your safety is in your own hands. I was merely stating what we do and will do to keep our children and ourselves safer, and I was curious as to how others felt about helmets.

Apparently, my ongoing equestrian education is now almost complete due to a few comments from our friend across The Pond. I don't mean to single this commenter out for abuse, and I don't want people to feel like they can't disagree in their comments here, but there is respectful disagreement and then there is being outright argumentative. I felt I had to address his comments made here and on a post of his own. To say the least, he heartily disagrees with me, which is fine, but I need to answer some of his theories or not be able to sleep at night.


Working with that logic, I suppose the same holds true for seat belts and airbags in a car. Clearly, one need not wear a seatbelt if one is a licensed driver, has a properly maintained car and drives under the speed limit on well-paved roads in clear weather. Never mind the odd blowout, a drunken driver using his cell phone, or an obstruction of some sort in the road; for example, it seems it is almost impossible to drive down the road these days without a random overfed, untrained horse ridden by an imbalanced English rider in a helmet and high visibility gear who inevitably loses control and streaks across your path. Even the best driver in the world will be forced to run over such an inept rider – if for no other reason than to teach that rider the valuable lesson that no helmet is going to save her life, and indeed, simply wearing one will probably, counter-intuitively, contribute to her demise through the arcane mechanism of “risk compensation” – aka “bizarro world metaphysics” – in which the wearing of safety gear apparently makes you channel Evel Knievel. In which case, perhaps even a seatbelt is a bad idea? Come to think of it, wasn’t that what made Thelma and Louise drive off that cliff? – The film might have been entitled “Risk Compensation and the Seatbelts of Insanity!” Catchy.

Following this logic, do I drive more recklessly when I wear my seatbelt because I know I’ll be better protected in an accident? I don’t think so. I’m pretty much trying not to crash my car all the time when I’m behind the wheel - not just when I’m not wearing my seatbelt. If I happen to also have an airbag in my car even that does not necessarily cause me to throw caution to the wind, floor the gas pedal, and burn rubber down the highway, doing donuts in the median while flipping off the nearest officer of the law. Even equipped with the airbag, I’m still pretty averse to totaling my car, especially if I happen to be inside it. I have a similar sense of self-preservation when riding a horse. This may sound odd to some of you, but I swear, when I put on my helmet, I’m not thinking, “woo hoo, now I can finally fall off!”

I think we can all agree that common sense and good preparation are the best safety measures to take before mounting a horse. So we have some common ground there. Where perhaps we differ is in the necessity of preparing for what lies beyond the statistically predictable. Some people are comfortable with risk. Others don’t fully appreciate what their risk is. Some people are genuinely frightened of getting hurt. And others, like me, just think the potential benefits of a helmet outweigh the mild inconvenience.

My statement about those awful looking skunk stripe helmets had me thinking after a few of your comments that, if they are the safest, I might just look into them. I hear the Charles Owens company has a helmet with a velvet covering and if these types of helmets are the safest, I may get one, even if I do think I would look like Kazoo. After all, my head can’t afford any more scrambled brains than it already has.

I’m glad so many of you have chosen to wear a helmet and insist your children do so as well. I respect the decisions of those of you who choose not to wear them also, and appreciate hearing your reasons for not doing so. Thanks again for all your comments; they were all interesting and mostly welcome. I hope all of you – those who wear helmets and those who don’t – never need to rely on one! Safe riding and happy trails. 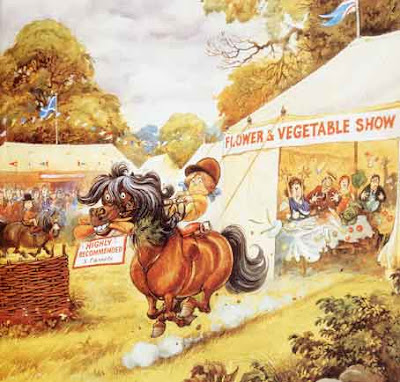 You'll never know how much you love to be on a horse... until you fall off!
Posted by Grey Horse Matters at 1:01 PM